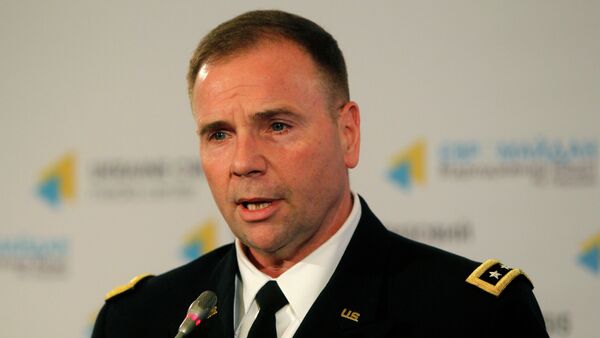 A former US commander in Europe has urged NATO allies to ramp up their defense efforts, as Washington will not be able to protect Europe from Russia and fight China at the same time.

Retired Lt. Gen. Ben Hodges, a former US Army commander in Europe, said Wednesday that the US will likely be at war with China within 15 years.

Speaking before an audience at the Warsaw Security Forum in Poland, Hodges said that European countries will have to do more to ensure their own defense in the face of a "resurgent Russia," because the US will need to focus more attention on defending its interests in the Pacific.

"The United States needs a very strong European pillar. I think in 15 years — it's not inevitable, but it is a very strong likelihood that we will be at war with China," Hodges said.

Stoltenberg Says NATO Doesn't Want New Arms Race While Siding With Trump on INF
"The United States does not have the capacity to do everything it has to do in Europe and in the Pacific to deal with the Chinese threat," he added, echoing sentiments previously expressed by US President Donald Trump, who has complained repeatedly that Washington bears most of the NATO burden while European nations are unwilling to boost their defense spending.

However, Hodges reiterated that the US commitment to NATO is "unshakable," saying that while Trump has questioned NATO's usefulness, Washington still views Europe's security as a key US interest.

"So you're going to see us continue to invest here in Europe, continue to train, to practice rotational forces, as well as permanently assign forces for the eventuality that in 10 or 15 years, we're going to be having to fight in the Pacific," Hodges said.

China Adds Powerful Graphene Armor to Z-10 Assault Helicopters - Report
According to Hodges, the signs of a looming war between China and the US include ongoing tensions in the South China Sea, Beijing's "constant stealing [of] technology," and China gaining control of infrastructure abroad by funding projects in Africa and Europe. In Europe in particular, China already owns more than 10 percent of sea ports, Hodges said.

Hodges was the US Army commander in Europe from 2014 to 2017. Today he is a strategic expert with the Center for European Policy Analysis, a Washington-based research institute.