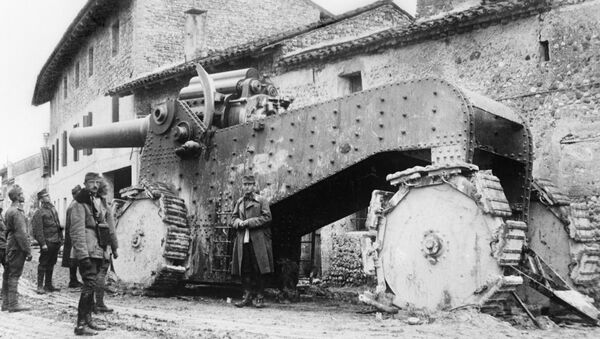 © Photo : Imperial War Museum
Subscribe
In October 1918 - 100 years ago this week - the German Army stared defeat in the face and its commander, Erich Ludendorff, resigned and fled to Sweden in disguise. Sputnik spoke to Alan Wakefield, a historian at the Imperial War Museum, about why Germany lost the First World War and how it affected 20th century history.

Next month marks the 100th anniversary of the end of the First World War when Germany signed an Armistice and admitted defeat after four years of muddy conflict on the Western Front.

Germany's allies caved in one after another — Bulgaria surrendered on September 29, the Ottoman Empire signed an armistice on October 30 and the Austro-Hungarians on November 3. Two days before Austria's surrender an Italian submarine sank the battleship Viribus Unitis, which had just been handed over to the National Council of Slovenians, Croats and Serbs.

In October 1918, as German troops retreated, General Ludendorff went to Kaiser Wilhelm and told him the war was lost and they should seek an armistice.

​Could Germany Have Won The War?

But why did Germany and its allies lose the war and could they have won it if events had not conspired against them?

And would Hitler and the Nazis not risen to power if Germany had won or at least negotiated a favorable peace, instead of the loathed Treaty of Versailles?

Alan Wakefield, Head of First World War and Early 20th Century Conflict at the Imperial War Museum in London, said Germany's one and only chance of winning was in 1914. 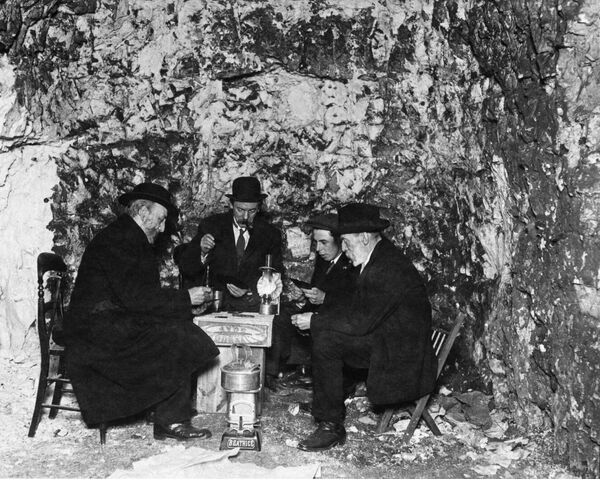 A group of Englishmen huddle in a cave beneath Ramsgate in Kent during a First World War air raid
© Photo : Imperial War Museum

"Their eventual defeat really comes back to the fact that they did not win a short war in 1914. They realized they did not have the resources to get a decisive victory on two fronts in a long war and they were hoping to get a quick victory," Mr. Wakefield told Sputnik.

"Once the British mobilized all the resources of the British Empire the Germans were in a difficult position. The Royal Navy was able to impose an economic blockade and starved the Germans of food supplies. Bad harvests in the Ukraine in 1917 meant Germany did not manage to get enough grain from the conquered territories and the capacity to fight the war went down," he told Sputnik.

Mr. Wakefiield — who has chosen 100 rare or unseen photographs from the war for a new book — said the Germans were hoping to knock the French out of the war early, using the Schlieffen Plan, a grand strategy which involved the strongest defences and invading France through Belgium, wheeling around behind Paris and cutting off the French armies.

'Britain Could Have Survived French Defeat' in 1914

"Had they won early I don't think they would have occupied France. They probably would have taken her overseas empire. Britain could have survived a French defeat. The Royal Navy would have defended the homeland and the empire," Mr. Wakefield told Sputnik.

"But (General Helmuth) Moltke weakened the Germans by sending a force over to fight the Russians. They were supposed to wheel around Paris but they turned left and down to the Marne, where they were defeated by the French and the British Expeditionary Force, and then retreated to the Aisne," Mr. Wakefield told Sputnik.

Robbed of an early victory, the Germans settled in for a long war of attrition, knowing their chances of victory faded day by day.

"As the war progresses Germany takes more and more risky gambles, including the decision to launch unrestricted submarine warfare in 1917. They hoped to starve Britain out of the war within six months and they gambled that even if it brought the Americans into the war the war would have ended before the Americans could come in and change anything," Mr. Wakefield told Sputnik. 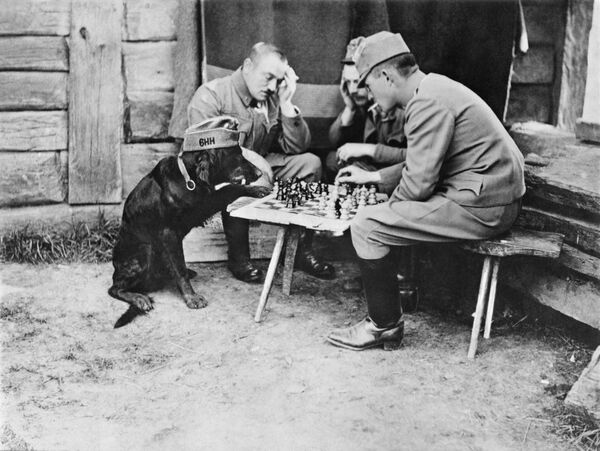 Eventually, after the disastrous Zimmermann Telegram — in which Germany offered Mexico some territory if it declared war on the US — was leaked, Washington did come into the conflict on the side of Britain and France.

"Ludendorff knew he had a small window of opportunity before the US could move enough men across to gain the upper hand. By the summer of 1918 there were three million American troops in France," Mr. Wakefield told Sputnik.

The failure of the Kaiserschlacht — Ludendorff's final offensive launched in March 1918 — was the beginning of the end for the Germans.

Germans Were Never Willing to Accept a Draw

Mr. Wakefield said the Germans should probably have sought a negotiated peace earlier in the war but he said the Prussian military elite were always looking for victory and expansion.

"The Germans were always looking to expand their European empire and take territory. At (the treaty of) Brest-Litovsk they took huge slices of territory and set up client states in Poland and Ukraine. That showed the allies that there could be no negotiating with them. The militarists always had the upper hand and they simply would not have been prepared to give up territory in France and Belgium," Mr. Wakefield told Sputnik.

That would have been unacceptable to the French but also to the British.

"It was war that had to be won because…Britain could not have a hostile enemy occupying the Channel coast and threatening those sea lanes," Mr. Wakefield told Sputnik.

On this day in 1918, the Ottoman Empire breaks with Germany and surrenders to the Allies. pic.twitter.com/qH5RR3rFfj

​"By late 1917 the casualty figures were so high that even if their governments had offered a negotiated peace the British and French people would not have supported it. Everybody had paid in so much. The war had gone too far. It was victory or nothing," Mr. Wakefield told Sputnik.

When Defeat Became a Matter of Time

As the German Army began to buckle on the Western Front in October 1918 there were the first signs of defeatism back home.

At the start of November sailors mutinied in the port of Kiel and several cities were taken over by left-wing revolutionary groups.

"Hitler would claim the troops were stabbed in the back by socialists and Jews. Obviously that was rubbish. The Germans were militarily defeated by the blockade and the allied effort on the Western Front. The German leaders got Germany out of the war before that was brought home to the German people," Mr. Wakefield told Sputnik.

"[US General] Pershing wanted to carry on and invade Germany. He may have said that because the US had not been in the war for long and hadn't seen as much action. Haig, Petain and Foch disagreed. They knew it would be a hard sell," Mr. Wakefield told Sputnik. 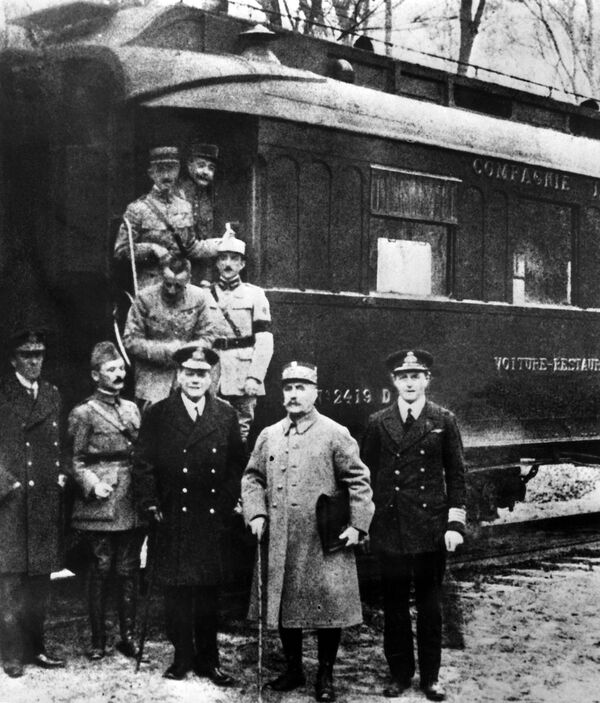 Marshal Ferdinand Foch (second from the right) and next to him Admiral Rosslyn Wemyss, sign the Armistice with the Germans in November 1918
© AFP 2022

If Germany had won, would the world have been spared the Nazis and the Holocaust?

Mr. Wakefield said it was impossible to say but although Hitler would make much of the style of the German capitulation at the end of the war the defeat alone could not explain the rise of the Nazis.

"It's not just the defeat, it's the economic crash of 1929 which does for the Weimar Republic. During the 1920s prosperity was coming back to Germany. Berlin was rivalling Paris in terms of nightlife. There were elements on both the right and the left who did not like the republic and once the economic collapse happened that is when it all went pear-shaped," Mr. Wakefield told Sputnik.

"Hitler went far beyond what the Germans were trying to achieve in the First World War but his attitude was that Germany had been defeated from within and hadn't really been defeated on the battlefield. He said Germany should have an army, a navy and an air force and the militarists supported him," Mr. Wakefield told Sputnik.

Maj. Cuthbert Finnie McEwen, DSO of Byron in #LdnOnt was killed in action on this day in 1918. The Canadian Light Horse member died when an artillery round hit the road he was patrolling. He's buried in Nord, France. #Canadas100Days #IfYeBreakFaith #swontremembers #WW1 pic.twitter.com/stVV3H9v3N

​He said the Germans' behavior in the First World War suggested it was a "dry run" for what happened under Hitler.

"They deported labour from France and Belgium to Germany. They executed lots of people in towns and villages in the occupied areas and they moved German settlers into the eastern territories. It was done a lot more nastily in the Second World War but the Germans in the First World War were very militaristic and they thought nobody was going to hold them account," Mr. Wakefield told Sputnik.