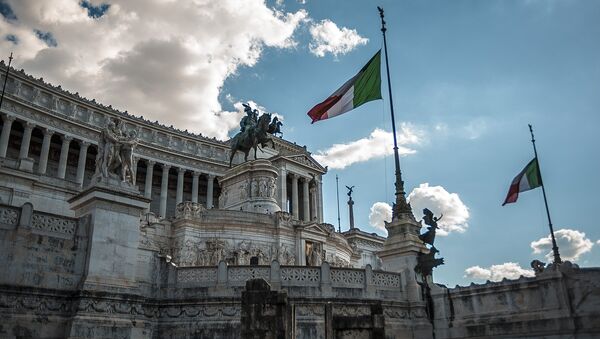 Andrew Lawford: We're probably getting to the inevitable conclusion of what was going to happen when the current coalition government took power because there has been a certain anti-European rhetoric, which's been combined with the desire to spend more money.

It ended. I suppose, we've just got into the neutral conclusion of that. I think, the interesting thing is going to be to see how it plays out over the next few weeks because now there is a deadline of three weeks.

In those three weeks, I imagine there will be some intense negotiations going on in the background, especially given the current government's declarations that they are not going to back down.

Sputnik: Now, first of all, I'd like to hear what you think about these three weeks. Is that enough time? Do you think, there is any chance that any kind of agreement or compromise will be found within that very short period of time?

'Changing the Economic Vector': Will Italy Leave EU Amid Budget Row With EC?
Andrew Lawford: Yeah, I think, there is the possibility that it's going to happen for the simple reason: I don't think, it's really in anybody's interests for the three weeks to expire without some kind of agreement.

So, what's going to happen in the next few weeks I would imagine, is there are going to be probably a lot of backroom discussions, in which, at the technical level, the Italians are going to try to justify the position that they've taken with the current budget. Basically, this means trying to convince the Commission that the public accounts are going to be fine in the medium to long-term.

As we know, that involves economic forecasts and I'm certain, they can be open to a lot of latitude. So, I would expect the European Commission to get some ground on it, but I guess, we gonna have to wait and see.

Sputnik: Generally speaking, the situation in Italy is a very high level of debt right now. Do you think that this is a very light-hearted budget, or what's the reasoning behind this budget? Do you think, it can be explained to the European Commission?

Andrew Lawford: I think, the maneuver that's been proposed on the current budget is definitely going to make the Italian accounts worse. So, there is no doubt about that.

The real critical thing to identify is the fact that the Italian public debt is already so high. Once you have a very high level of public debt, then your vulnerability increases and your level of flexibility decreases. I suppose that's really the situation. You know, Italy has over a long period of time created a sort of debt trap for itself and is continuing on in that way now, which essentially leads to ramping up of public spending in order to solve a debt crisis, involves issuing more debt.

There is a certain circularity to that argument and I think it is very difficult to justify. On the same account, I think when Italy looks at the way that the EU has worked up until now if you look at the Maastricht Treaty and the parameters, which were agreed, if you're going back to 1992.

It talked about a debt to GDP ratio, not exceeding 60% and an annual government deficit not exceeding 3%, and I think, there are already 2 or 3 countries in the European Union that have actually respected those parameters over the period since the Maastricht Treaty became into place.

I suppose, Italy could quite justifiably say: "Why us and why now?", because nobody else has ever actually been sanctioned. If you look at it, what is the point in European Union applying a monetary sanction to a country which has too much debt. That is not actually going to resolve the problem; that's gonna make it worse.

Sputnik: It's very interesting to note that just on Monday Prime Minister Giuseppe Conte said that Italy is not going to leave the Eurozone or the Euro. "No chance of an Italexit" — is what he said basically. "Read my lips! For Italy, there is no chance of Italexit to get out of Europe or the Eurozone." That's not going to be used as leverage… threats of that. What do you think might be used as leverage?

Italy Sees 'No Chance' for Exit From EU, Eurozone Amid Budget Row
Andrew Lawford: In order to get the EU to cooperate, again, I imagine there is going to be a lot of persuasions based on the fact that the public expenditure, what is going to happen, it is going to have a positive effect.

They talk a lot now about the fact that they're abandoning austerity and that they're looking at growth. And so, if you can convince the EU that growth is going to be the result of what's happening with this budget, then I suppose that will allow the EU to say: "Well, OK. We're happy. We're going to keep monitoring what Italy is gonna do, but we're happy for them to do it, because this is going to lead to growth and growth is a far better outcome than austerity, because you only have to look at Greece in order to understand that."