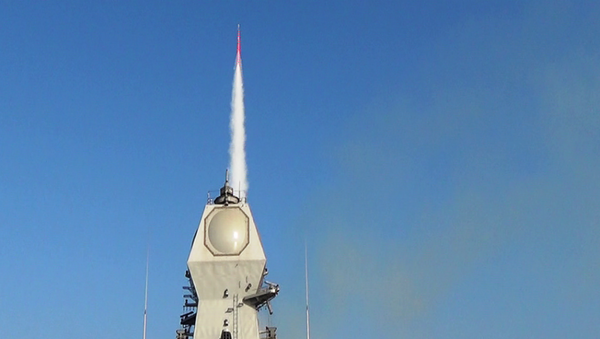 The Barak 8 air defense system, with a range of 70 kilometers, makes use of several high-tech, state-of-the-art systems such as digital radar, command and control launchers, interceptors with modern RF seekers, a data link and system-wide connectivity, according to the Israel Aerospace Industries.

Israel Aerospace Industries (IAI) has won a mega contract worth $777 million for the supply of the marine version of the Barak 8 air missile defense systems for seven ships of the Indian Navy's Project 17A, the company announced Wednesday.

"With this deal, the sales of the Barak 8 over the past few years total over $6 billion. This is another example of the capabilities of this advanced weapon system, which serves as a central growth engine for IAI," Boaz Levi, Executive Vice President and General Manager of IAI's Systems, Missiles & Space Group said in a statement.

Israeli Navy Saar 6 Corvettes to Be Equipped With Barak 8 Missiles
IAI was roped into the contract by Indian firm Bharat Electronics Limited (BEL) which serves as the main contractor in the project. The company claims that Barak 8 provides broad aerial and point defense against a wide range of threats to the marine arena from the air, sea or land.

"IAI's partnership with India dates many years back, and has culminated in joint system development and production India is a major market for IAI and we plan to reinforce our positioning in India, also in view of increasing competition," IAI Chief Executive Officer Nimrod Sheffer said.

Sources told Sputnik that India's Project 17A stealth frigates are to be equipped with LR-SAM systems. Four warships of the class are to be manufactured at Mazagon Dock Limited, Mumbai (MDL) while three ships at Garden Reach Shipbuilders and Engineers (GRSE) in Kolkata.

IAI also announced on April 6, 2017, that the company will supply an additional marine version of its air and missile defense systems for INS Vikrant, India's indigenous aircraft carrier, which is being built in Kochi.

The Barak-8 system was developed by IAI in collaboration with Israel's MOD, India's DRDO (Defence Research and Development Organization), the navies of both countries, IAI's ELTA Group, RAFAEL and other local industries of India and Israel.