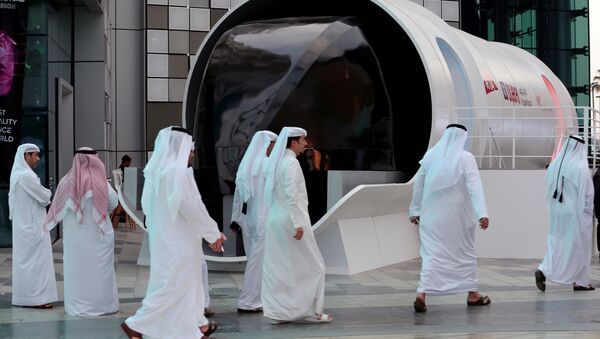 Hyperloop Transportation Technologies (HTT), a California-based research company, revealed on Wednesday that it would start the construction of an ultra-fast commercial hyperloop track in Abu-Dhabu in Q3 2019.

HTT announced the design and engineering firm Dar Al-Handasah as the lead designer and the latest investor in the Abu Dhabi project. "We are bringing the future of rapid transportation technology to all those living in the UAE," HTT Chairman Bibop Gresta said, as cited by Gulf News.

In April, the US firm struck a deal with Aldar Properties, Abu Dhabi's state-owned developer, to build a 10-kilometer track on the border of Abu-Dhabi and Dubai in a bid to connect Abu Dhabi to Al Ain (UAE) and Riyadh (Saudi Arabia). At that time, Bibop Gresta praised the project as the first commercial Hyperloop system in the world and voiced hope that the project will be implemented before the universal exposition Expo 2020.

According to the Hyperloop concept, people and cargo can travel at airline speeds of up to 1,200 km per hour in special capsules through miles-long sealed steel tubes using magnetic levitation. The idea was originally proposed by Tesla founder Elon Musk in 2013 as a replacement for more expensive and less efficient rail transportation; he described it as a crossover of a Concorde. a railgun, and an air hockey table.

The main contenders in the Hyperloop sector now are Musk's own SpaceX, HTT, and Virgin Hyperloop One. The latter voiced plans to tap into the Arab market in August, saying that it would open its first office outside of the US in the UAE.