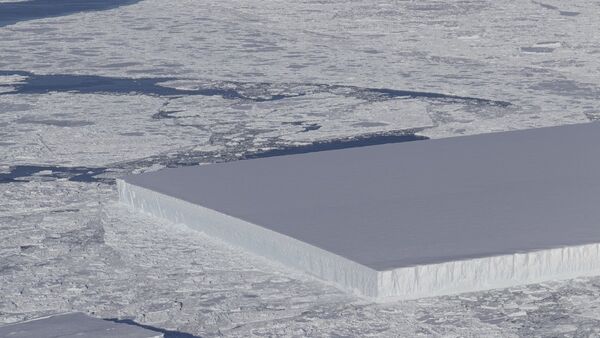 The US space agency's explanation that the odd-looking iceberg's sharp angles and flat surface was an indication that it had recently broken off from a larger iceberg didn't seem to cut it online.

The spectacular photo of a massive rectangular iceberg with perfectly pointed edges, taken by a NASA research aircraft last week, left people scratching their heads as to how on earth this was possible.

Scientists explained that the iceberg in the photo was a tabular iceberg – a large slab of ice with a flat top and vertical sides which form by calving (splitting) from a larger ice shelf. Such non-conventional icebergs can be massive, with the record-setting 11,000 square kilometer Iceberg B-15, visible from space, spotted off the Ross Ice Shelf in Antarctica in 2000.

However, in their responses to NASA, some Twitter users insisted that the spectacular rectangle-shaped iceberg was either man-made, alien-made, or both, with some insisting that nature "doesn't draw straight lines."

Others had some more bizarre 'theories'.

This is TOFU shop in japan. pic.twitter.com/NhaLKEifFI

It’s the ice wall that Flat Earthers talk about!

More proof we are all living in a simulation.

In any case, users stressed that the iceberg certainly looked interesting, with several suggesting it reminded them of a scene out of Stanley Kubrick's 2001: A Space Odyssey.

Others simply posted photos of other majestic tabular icebergs.