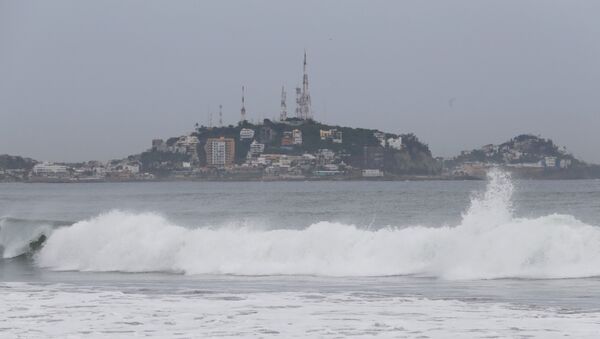 On Tuesday, Category 3 Hurricane Willa made landfall in western Mexico just south of the resort town of Mazatlan with 120 mph winds and high waves. Farther south, 12 people died due to heavy rains from Tropical Storm Vicente, which formed off the southern coast of Guatemala last weekend and continues to move northwest.

Although Willa weakened from a Category 5 to a Category 3 hurricane on the five-step Saffir-Simpson scale Tuesday morning, the US National Hurricane Center still warned residents that the hurricane will bring a dangerous storm surge, wind and rain to western Mexico. Thousands of people were evacuated, and schools closed on Mexico's Pacific coast Tuesday ahead of Willa's gales and downpours.

​On Tuesday morning, the storm swirled 35 miles southwest of the Islas Maria, a group of islands about 60 miles offshore. Isla Maria Madre, which is the largest of the four islands that make up the archipelago, is home to 1,200 residents. Later that afternoon, Willa was 105 miles south of Mazatlan, a Mexican resort town along the Pacific shoreline in the state of Sinaloa. So far, there are hurricane warnings from San Blas, east of the Panama Canal, to Mazatlan along the western Mexican coastline. A decree of "extraordinary emergency" has been set for 19 municipalities in Nayarit and Sinaloa states.

​"People are really scared," she said. "People are crazy and worked up."

"An extremely dangerous storm surge is likely along portions of the coast of southwestern Mexico in southern Sinaloa and Nayarit, especially near and to the south of where the center of Willa makes landfall," the US Hurricane Center announced Tuesday morning.

​The Hurricane Center also warned that Willa could cover parts of Jalisco, Nayarit and Sinaloa states with 6 to 18 inches of rain.

"This rainfall will cause life-threatening flash flooding and landslides," the Hurricane Center warned Tuesday.

​"Let's not play the macho," he said, the Huffington Post reported Tuesday. "Let's not act like superheroes. It's a very strong hurricane, very potent, and we don't want any tragedies."

Remnants from the storm will most likely "spread northeastward over northern Mexico and portions of Texas, where a swath of heavy rainfall is expected midweek," the Hurricane Center also reported.

​Earlier this month, Hurricane Michael made landfall near Mexico Beach, Florida, bringing winds of up to 155 mph and resulting in the deaths of at least 29 people.