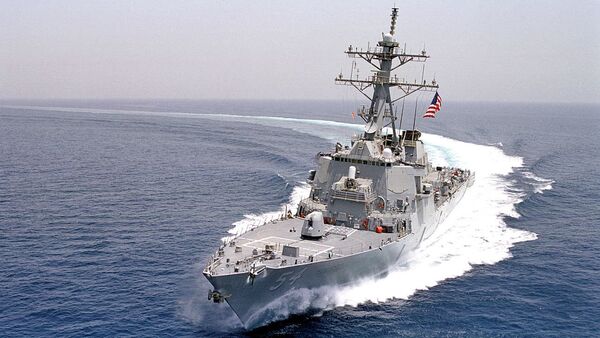 The Pentagon confirmed that it had sent two US Navy vessels through the Taiwan Strait, making it the second such operation this year.

Hua Chunying, a Chinese Foreign Ministry spokeswoman, has expressed serious concern over the US Navy sending two warships through the Taiwan Strait on Monday.

Taiwan's Defense Ministry, for its part, said in a statement that they were aware of the "routine" operation and that the Taiwanese army "has the ability to maintain the security of the seas and the airspace to ensure regional peace and stability."

He described the transit as "the US commitment to a free and open Indo-Pacific," pledging that "the US Navy will continue to fly, sail and operate anywhere international law permits.

Manning also referred to the US maintaining "coordination and contact with the appropriate nations, authorities and parties" when conducting the transit, saying that it was "certainly not the Department [of Defense]'s intention to raise tensions or any kind of escalation" across the Taiwan Strait.

Former US Intel Chief: Taiwan Should Practice Attacking China’s Liaoning Carrier
Earlier, Beijing expressed concern over the presence of a US vessel in the Taiwanese port of Kaohsiung, urging Washington and Taipei to end all military contact.

The US, along with many other countries, does not recognize Taiwan as a sovereign nation and officially adheres to the "One China" policy. However, Washington has maintained informal relations with the de facto government of Taiwan despite breaking diplomatic ties with Taipei in 1979.