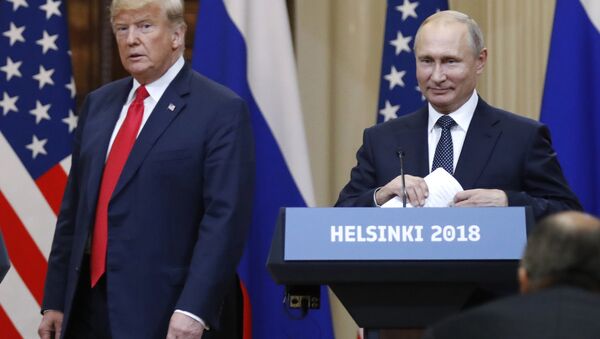 © AP Photo / Alexander Zemlianichenko
Subscribe
LONDON (Sputnik) - A representative of the UK Foreign Office claimed in comments to RIA Novosti on Monday that Russia had ignored the US calls for the implementation of the Intermediate-Range Nuclear Forces Treaty and deliberately complicated the problem, adding that Russia's behavior in general allegedly threatened the global security.

"We have consistently, along with NATO allies, supported US efforts to bring Russia back to compliance, including most recently at the NATO Summit in July. Russia has offered no credible response to our shared concerns. Only obfuscation and contradictions, designed to mislead. This fits a wider pattern of behavior from Russia, which seriously undermines our security," the representative said.

The comment was made in wake of US President Donald Trump's announcement made on Saturday, saying that the United States would withdraw from the INF treaty over the alleged violations of the agreement by Russia.

READ MORE: Many US Lawmakers Will Support Trump Withdrawing US From INF Treaty — Rubio

Earlier on Monday, Russian Foreign Minister Sergey Lavrov stated that Moscow would formulate a position on the issue only after receiving official clarifications from Washington. He added that any action in this area would be met with a counteraction, stressing that parity would be maintained under any circumstances.

The United States and Russia have repeatedly accused each other of violating the INF Treaty. Moscow, in particular, stated that the United States was deploying launchers for Tomahawk missiles in Romania and Poland, which was prohibited by the agreement. The Russian party has also pointed to the fact that Washington was developing armed drones and financing the research on the development of a ground-launched cruise missile. Meanwhile, the Russian authorities have stressed on numerous occasions that Moscow strictly complied with the obligations arising from the treaty.

The INF treaty was signed between the Soviet Union and the United States in 1987 and required the parties to destroy their ground-launched ballistic and cruise missiles with ranges of between 500 and 5,500 kilometers (from 311 to 3,317 miles).

000000
Popular comments
all EU, Asian & Russian companies should sanction all US companies which could produce those dangerous missiles; finish de-dollarization globally so Us economy collapses and cannot produce those missiles; and move from SWIFT system to new Russian paying system SPFS
Nitai
22 October 2018, 21:50 GMT
000000
The UK speaks - the vassal state of the US,dances to any tune played by the US !