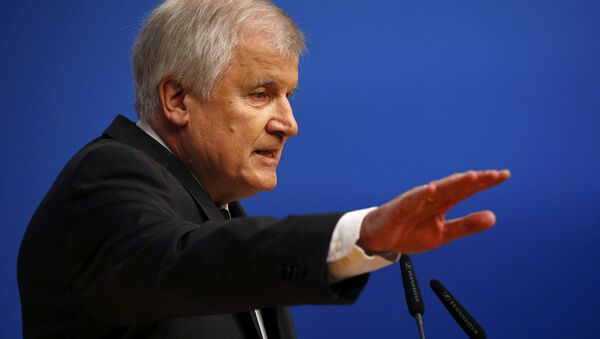 © REUTERS / Kai Pfaffenbach
Subscribe
The German interior minister, known for his hard stance on German migration policy and the showdown with the chancellor, has claimed that he would rather let anyone take the leadership in the Bavarian sister party of Angela Merkel’s CDU than become a fall guy for the CSU’s historically low results in the regional vote.

Horst Seehofer, leader of the conservative Christian Social Union (CSU), allied with the Christian Democrats, has stated that he would resign if his party solely blamed him for the fiasco in the regional election and losing the decisive majority in the Bavarian state parliament.

The politician, who doubles as Germany’s Interior Minister, told the regional broadcaster Bayerischer Fernsehen over a beer glass that he wouldn’t go down the path he chose last year, when Seehofer resigned as the minister-president following the CSU's failure in the 2017 federal election.

“I won't play the scapegoat again. You can criticize me, but to reduce it all to Horst Seehofer and make him responsible for everything, I personally will not go along with that. Instead, I will make my position as party leader available; I do not think you can express it more clearly," he claimed in the interview.

He lamented that he had caved in to criticism and resigned as the head of the Bavarian government after the unsatisfactory results of 2017; federal election were “pinned” on him, although he “was neither a leading candidate nor did I make a [campaign] appearance anywhere.“

The CSU managed to attract 37% of voters in the German state's parliamentary election, which is 10 percent less than in 2013. It has been the CSU's worst result in 50 years as the conservative party has dominated the Bavarian parliament for decades. This blow came just a year after the devastating outcome in the German federal elections.

The CDU-CSU bloc lost 8.6 percent of the votes, securing 41.5 percent. The CDU is still the largest party in Germany, but the decline of the CDU-CSU and of the coalition partner SPD has weakened the federal government.

Over the past decade, the CSU has been challenged by two rival parties with similar platforms — the conservative regional party Free Voters, who are rooting for a restrictive asylum policy, and the right-wing anti-migrant Alternative for Germany (AfD) party. In the recent election, the FV attracted 11.6 percent of the vote, while the AfD attracted 10.2 percent.