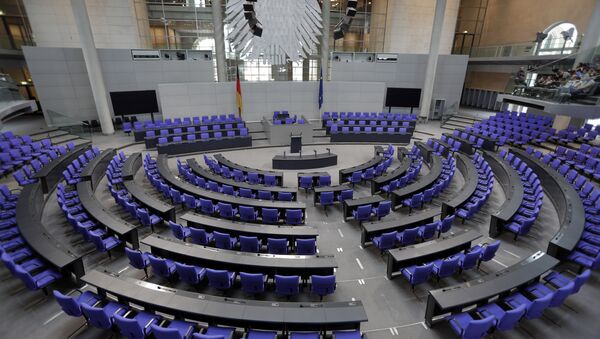 © AP Photo / Michael Sohn
Subscribe
MOSCOW (Sputnik) - The intention of the US to pull out from the Intermediate-Range Nuclear Forces Treaty (INF) might reflect Washington's desire to reach a new deal with better conditions, the Left Party spokesperson in the Bundestag Defense Committee told Sputnik.

"This is very bad news from the United States because intermediate and short-range systems are quite dangerous for Europe… On the other hand, it is not to exclude that the United States wants just a new treaty with better conditions, like [in the case of] the nuclear deal with Iran," Alexander Neu, the Left Party (Die Linke) spokesperson in the Bundestag Defense Committee stated on Monday.

The spokesman added that he was not able to assess the credibility of Trump's claims about Moscow breaching the treaty, and stressed once again that the document's nullification would, first of all, affect Europe.

Earlier in the day, the German Foreign Ministry's spokeswoman, Maria Adebahr, noted that Berlin advocates the preservation of the INF, as well as the functioning mechanism for reduction of weapons in Europe.

Prior to that, Russian Foreign Minister Sergei Lavrov stated that Moscow would formulate a position on the issue only after receiving official clarifications from Washington. He added that any action in this area would be met with a counteraction, stressing that parity would be maintained under any circumstances.

The statements followed the US President Donald Trump's announcement made on Saturday that the United States would withdraw from the INF treaty over the alleged violations of the agreement by Russia.

In May, the United States withdrew from the Iran nuclear deal, formally known as the Joint Comprehensive Plan of Action (JCPOA), which stipulated the gradual lifting of the anti-Iran sanctions in exchange for Tehran maintaining the peaceful nature of its nuclear program. Commenting on the decision, Trump stated that he expected to negotiate a better and fairer deal with Iran.

Germany Encourages to Preserve INF Treaty, to Reduce Arms Mechanism in Europe
Another deal Washington mulls to exit, the INF treaty, was signed between the Soviet Union and the United States in December 1987 and required the parties to destroy their ground-launched ballistic and cruise missiles with ranges of between 500 and 5,500 kilometers (from 311 to 3,317 miles). The United States and Russia have repeatedly accused each other of violating the treaty.

000000
Popular comments
. With the continued decline of the US Dollar demands internstionally, with the mounting national debts, with expenses soaring in various domestic sectors, the US itself will not be able to sustain the arms race The INF insolvency is a great opportunity for Russia to add more quality stockpile. With Russia-China-India cooperating in the weapon development sectors the US will be left begging for a treaty.