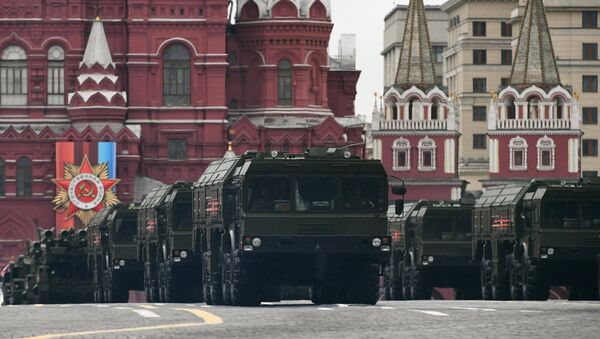 © Sputnik / Alexandr Vilf
/
Go to the photo bank
Subscribe
US plans to withdraw from the Intermediate-Range Nuclear Forces Treaty (INF) have been slammed by its European allies. Meanwhile, Moscow has warned that it would do what it takes to preserve strategic parity. Non-proliferation specialist Gotz Neuneck told Sputnik why the US and Russia could easily resolve their differences, but probably won't.

Sputnik: Why would the US want to withdraw from the INF treaty?

Gotz Neuneck: I think the real reason is John Bolton, who was throughout the years very skeptical on Russia, and the INF crisis is not a new one. It started in 2014 [when President Obama accused Russia of violations]. Now the administration seems to have come to the conclusion that there is no movement in the right direction.

Of course such a step is very risky, and could be very counterproductive, because we might lose a central arms control treaty which has also to be seen in relation to the Strategic Nuclear Arms Control Treaty – the New START Treaty or START-3 Treaty, as it is called in Russia.

Bolton Speaks With Lavrov Amid US Plans to Withdraw From INF Treaty (VIDEO)
There is a majority of skeptics in the US Congress saying Russia is violating the [INF] treaty, and so it must be gotten rid of, but if we do so we cannot come back to any arms control framework, and that is the risk for the moment.

Sputnik: This idea has been criticized as being very dangerous, of undermining nuclear disarmament prospects. Do you share this view, and what are your thoughts on the most pressing reactions that we could see if the US does in fact withdraw from the INF Treaty?

Gotz Neuneck: That's an open question. John Bolton is actually in Moscow, and there is still room to explain and resolve the differences here. We should keep in mind that Russia is accused by the US of stationing ground-to-ground cruise missiles. It is, from a physics point of view, not easy to determine the range of cruise missiles, so Russia could shed some light on this by opening these disputed systems to inspections.

On the other hand, Russia is also accusing the US of having the capability to use the missile defense interceptor sites in Romania and Poland to deploy offensive systems. That could also be solved by inspections, by data exchange. Obviously, both governments are not in any cooperative mood to do that. It would be easy to do. If these accusations are wrong, both sides could shed light on it…

Sputnik: What are your hopes for the meeting between Lavrov and Bolton?

Gotz Neuneck: I hope both sides think twice, because a collapse of the INF Treaty would more or less open the door for a new arms race with ground-launched cruise missiles and ballistic missiles. This is very dangerous, this is very costly, and we start again with the threatening game against European capitals that could propel the voices of those who say 'we need more missile defense, we need more missiles and we need more nuclear warheads', and at the end this is a new full-fledged arms race.

What You Need to Know About Nuclear Arms Treaty With Russia Trump Wants to Quit
So hopefully, decision-makers on both sides come to a conclusion that they want to circumvent that, and I think they have the tools in their hands to solve the problem. Both sides can solve the problem. If they don't do it, we are in trouble.

Sputnik: What has been the reaction in Europe, and do you think that Germany for instance and other European allies of the US can apply pressure on Bolton and Trump to avoid this scenario of dissolving this treaty and putting the world in a much more dangerous place?

Gotz Neuneck: I hope they could pressure, on both by the way – on Washington and also on the Kremlin. But I have doubts whether these two countries, these nuclear superpowers, would accept any advice here. They see it as their own business. Of course the Europeans can build bridges, they can make proposals on how to organize inspections, send inspectors, try to solve that severe problem but I have doubts that Europe as such or some countries have the tools to bring the big nuclear powers to some kind of reasoning. Of course they should try, and we should not forget that [Germany's] foreign minister has said that the INF treaty is very important for them and for Euro-Atlantic security.

I think we don't need a new nuclear iron curtain, we don't need new threats, we should work in terms of economic welfare and exchange and a peaceful European structure, and not building new missiles to threaten each other. I think that is the wrong way forward. We have had this experience once, and I hope that we do not want to repeat that again.

Dr. Gotz Neuneck is a physics professor and co-director of the Institute of Peace Research and Security Policy at the University of Hamburg. The views expressed by Dr. Neuneck are his own, and do not necessarily reflect those of Sputnik.

000000
Popular comments
Does Russia really want to get into an arms race again? It didn't end well for the USSR.