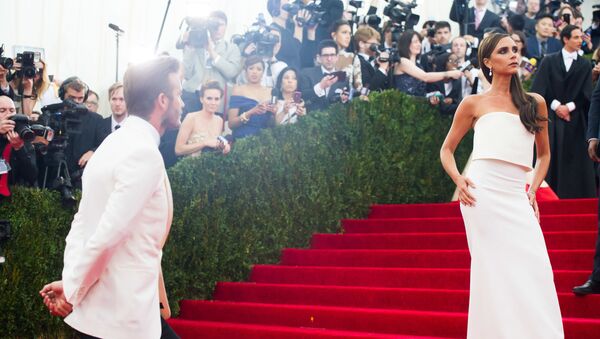 After rumors about the separation of the UK power couple surfaced this summer, the former football star dropped what their friend reportedly described as “a nuclear bomb” on the Beckhams’ household with his recent revelations on his marriage.

Fashion designer and former Posh Spice Victoria Beckham is said to have been absolutely devastated following her husband David Beckham’s interview on hardships of their 19-year-long marriage, as the Sun reports. The British outlet has cited an unnamed friend close to the celebrity family as saying that the 44-yearl-old woman was in pieces.

“She has no idea why he would say such insensitive things and publicly embarrass her like this. As you can imagine, it was as if a nuclear bomb had gone off in the Beckham household when she found out. She was in pieces and spent the next two days crying. To say it’s not been the best of weeks is an understatement,” this family friend claimed.

A preview of David Beckham’s full tell-all interview with an Australian TV show emerged earlier this week. Beckham, who is in Australia for the Invictus Games, opened up about his nearly two-decade-long marriage and parenting in the interview, which aired on the Sunday Project.

"To be married for the amount of time that we have, it's always hard work, everybody knows that but you make it work. You make difficult situations like traveling away, being away from each other, you make it work," the ex-footballer stated.

David Beckham, who has three sons and a daughter with Victoria, stated that the “marriage is always about hard work.”

“Your children, they want your time and they deserve your time and we are hardworking and we feel that is the right way to bring up our children to prove and to show to them you have to work really hard to be successful," he said.

These revelations made a splash on social media, where many users remembered rumors about the couple’s divorce which surfaced this summer.

Are the bookmakers taking bets on the Beckham's future divorce?

A divorce will be a blessing in disguise for Victoria and her kids,David Beckham is a sinking ship.I 100% believe a huge scandal on him is coming soon.Leave the Titanic Victoria

​Some slammed the footballer for being too open.

I have always liked David Beckham but why does he always bring out the skeleton in the closet…. I am not talking about Victoria!

​Others downplayed these statements, saying there’s nothing sensational here.

All marriages are hard work.

Very misleading he was just saying that marriage can be hard work! Not that Victoria is hard work! Lazy mind numbing reporting 🙄

So David Beckham is in the 'news' again for saying marriage to Victoria is hard work.
Marriage to anyone is hard work. Ask anyone who has tried it.#notnews #moveon

Amid these speculations, Victoria Beckham has posted several stories on her Instagram with a geotag Sydney, where the Invictus Games are set to start. David Beckham is reported to be in the city for the games, where he will be playing the role of "ambassador."