Julian Assange and the Tale of Tobermory 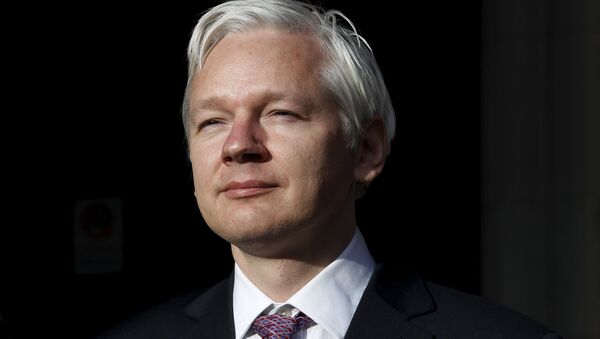 Neil Clark
All materials
The Wikileaks co-founder has been in the news again with the announcement that he's going to sue the Ecuadorian government in whose London Embassy he's been taking refuge in these last seven years.

Julian Assange claims his ‘fundamental rights and freedoms’ have been infringed by the new rules of conduct that the Ecuadorians are insisting upon. Among them, the Australian is being told to take better care of his pet cat, or risk having it taken away to a shelter. Assange's's lawyer says 'mention of the cat is degrading'.

Critics of Julian have had plenty of fun with the pussy story. But it's another tale involving a fantastic feline which the Assange case reminds me of. One written by the wildly funny, but remarkably sagacious Edwardian comic writer H.H. Munro aka Saki.

Saki poked fun at the hypocrisies of the age he was living in, and exposed some pretty brutal home truths (you can read my appreciation of him for the Telegraph here.

'Tobermory' was published in 1911, three years before the First World War, but its message remains highly relevant today. I wonder if Julian Assange has ever read it?

The scene is a house-party hosted by one Lady Blemley. One of her guests is Mr Cornelius Appin. He comes with the reputation of being 'clever', but it's not until tea-time that Lady Blemley discovers in which direction her guest's cleverness lies. Mr Appin has been spending seventeen years trying to teach animals to talk. And he has finally succeeded with the dear old house cat Tobermory! The cat in question walks in and when asked if he'd like some milk replies: 'I don't mind if I do'.

Science & Tech
WikiLeaks Publishes Alleged Secret Files on Amazon's Data Centers
It's all very exciting for the guests, until Tobermory is asked by Mavis Pellington what he thinks of 'human intelligence'.  The talking cat replies: 'You put me in an embarrassing position. When your inclusion in this house-party was suggested Sir Wilfrid protested that you were the most brainless woman of his acquaintance, and that there was a wide distinction between hospitality and the care of the feeble-minded. Lady Blemley replied that your lack of brain-power was the precise quality which had earned you your invitation, as you were the only person she could think of who might be idiotic enough to buy their old car'.

Saki then records: 'Lady Blemley's protestations would have had a greater effect if she had not casually suggested to Mavis only that morning that the car in question would be just the thing for her at her Devonshire home.'

READ MORE: Assange to Sue Ecuador Over Violating His Rights, 'Gagging' Him

Tobermory goes on to reveal some more embarrassing secrets of the guests which they'd rather have kept hidden. 'The panic which ensued was not confined to the Major', says Saki.

There was a fear that Tobermory could impart his 'dangerous gifts' to other cats, including his 'intimate friend', the stable puss.  Lady Blemley and her guests agree that dear old Tobermory must be destroyed as quickly as possible. Animal rights simply don't come in to it. As for Cornelius Appin, Saki reports that it was probable 'that a strong minority vote would have been in favour of including him in the strychnine diet'.

World
New Face of WikiLeaks: Facts to Know About Kristinn Hrafnsson
There was much nervousness as Tobermory disappears: Clovis Sangrail, a mischievous young man, suggests he's been talking to the newspapers- but there's huge relief when his corpse is found in the shrubbery.

Mr Appin's demise is also not far off. A few weeks later, he's reported as being killed by an elephant, 'which had shown no previous signs of irritability', in the Dresden Zoological Garden. 'If he was trying German irregular verbs on the poor beast he deserved all he got', remarks Clovis sardonically.

Which brings us back to Mr Assange. You can compare him to Cornelius Appin, or the cat Tobermory, in this parable. When Julian and Wikileaks first burst on to the scene just over a decade ago, western liberals- and quite a few Establishment figures- loved them. Wikileaks opened up dictatorial governments! They were helping the 'Arab Spring' with their disclosures! Assange won an award from The Economist and the Index on Censorship. Some critics muttered that the Australian computer programme/hacker was CIA. It was all a 'western plot'.

But when it became apparent Wikileaks were about opening ALL governments, including western ones, the panic set in, as at Lady Blemley's house-party.

Assange's organisation released over 400,000 classified documents on the Iraq War.

World
Ecuador Named Assange Adviser to Embassy in Russia, Then Annulled Decision - MP
They released over 75,000 secret US military reports covering the war on Afghanistan. They published a 2006 cable from the US Ambassador to Syria which discussed how the US could 'exploit' ethnic divisions in the country. They also revealed how desperate UK politicians were to curry favour with the US- and the deals made between the UK and Saudi Arabia to get both countries on the UN Human Rights Council.

We weren't meant to see any of this. In the same way Mavis Pennington wasn't meant to know that her hosts regarded her as mentally deficient. The response was the same as in Saki’s story. There were calls for Assange- like Tobermory- to be destroyed. Human rights simply didn't come into it.

"Julian Assange is engaged in terrorism. He should be treated as an enemy combatant," declared Republican Newt Gingrich. "Illegally shoot the son of a xxxxx.. We've got special ops. Dead men can't leak stuff,"  said the Democratic Party pundit Bob Beckel, — and all the guests on the Fox News programme agreed with him.

Ecuador Embassy Sets Rules for WikiLeaks’ Assange Asylum - Reports
The thing is everyone loves a whistleblower or a leaker. If it's someone else- who you don't like- who they're whistleblowing or leaking against. But when it's your secrets that are being exposed it's a different thing altogether. If Julian Assange had been Russian or Chinese, leaking classified Russian or Chinese state documents- and been holed up for seven years in a foreign Embassy in Moscow or Beijing, he'd be hailed as a Courageous Fighter for Truth and Freedom. Instead he's a pariah. Accused of running away from rape allegations. Of being a 'terrorist' and a ‘Russian agent’. The people who in 2008 were mad about the boy, are, ten years on, mad AT the boy. But the difficulty Julian has is this: even those criticising his ongoing persecution would have second thoughts about helping him out, as he and Wikileaks, are likely to leak their secrets too.

If you knew a cat like Tobermory you'd find it frightfully amusing as he told you  what that sour-faced couple you don't like at Number 72 had been up to. But would you like him to tell others about what you said about the vicar, your boss and your in-laws?

'Opening governments' is wonderful, so long as it's not yours that's being opened. Talking cats are great too, so long as they don't talk about you.

This is the basic problem that Julian Assange and indeed all truth-disclosers have.

Saki in his great wisdom saw it all, one hundred and seven years ago.