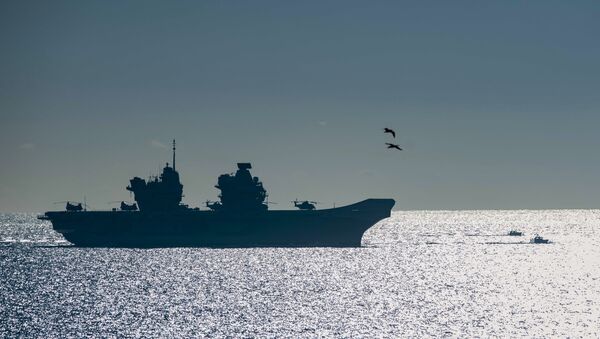 As £3.1bn-behemoth from the Royal Navy fleet, HMS Queen Elizabeth, with 1,500 personnel on board, anchored two miles away from Manhattan, its commanding officer, Captain Jerry Kyd said he was “delighted” to have brought the biggest aircraft carrier to New York in more than half a century.

“This visit is very symbolic of the intimate relationship the Royal Navy has with the US Navy and Marine Corps and comes at the midway point in the F-35 flight trials. We have over 170 embarked US staff at the moment on board in support,” Captain Jerry Kyd said.

Got the chance to randomly fly over the new UK Aircraft Carrier @HMSQnlz entering the New York Bay! I saw it coming as I was flying south. On my way back, I got the perfect timing to take this picture:) #hmsqueenelizabeth #wingfriday #aircraftcarrier #nyc pic.twitter.com/51LAcQSebb

Dwelling on the increased threats to the security of the United Kingdom, Captain Kyd painted a quite terrifying picture of the future of warfare:

“I think the coalescence of militarization, quantum computing, of automated fighting elements whether it is in the air, the surface or subsurface, the ability of computers and machines to make fast decision making loops – I think will fundamentally change the character of warfare.”

He continued, “The nature of warfare won’t change – which is to dominate and kill the enemy. I think it is an exciting but deeply frightening future where I think the ethics and morals of war will be tested, and where we will see, I am sure, robots engaged in killing other human beings.”

Reflecting on the potential forms of warfare, Captain Kyd suggested the world will see an increase in biological, chemical and genetic ways of waging wars.

“I think we will see all sorts of vile methods. Viral warfare, and also attacks fundamentally against civilian populations through bringing down infrastructure, power grids, cyber warfare – a full spectrum of activity against the population which will be deeply frightening.”

Later on Saturday, UK Defense Secretary Gavin Williamson is expected to visit the vessel, where he will deliver a speech during a special Trafalgar Day dinner held on board.