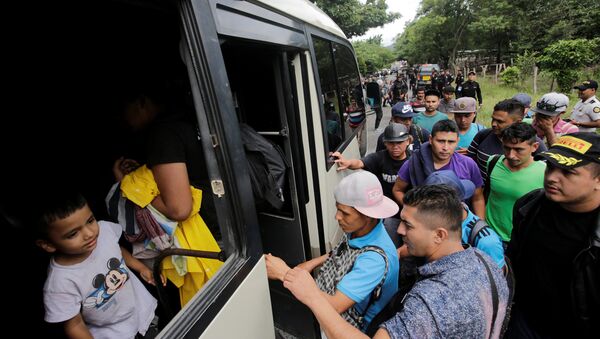 © REUTERS / Jorge Cabrera
Subscribe
Thousands of migrants from Latin America traveling in caravans and seeking asylum in the United States are regularly stopped at the Mexican border.

President Donald Trump has again threatened to stop providing financial assistance to Honduras and El Salvador if they do not prevent caravans of migrants moving towards the US border. He also blamed Democrats for organizing the latest such march which he said is full of “hardened criminals.”

“These are some bad people. These aren't little angels. These are some hardened criminals coming up. And we're not letting them in,” Trump told the media during roundtable discussions in Arizona on Friday.

“They put all the women and children up front, to show you how brave they are,” he added.

Speaking at a rally later in the day, Donald Trump again spoke about the “bad people in those groups.”

Trump Threatens to Send US Military to Border If Mexico Doesn't Stop Migrants
“You got some tough people in those groups, and I'll tell you what, this country doesn't want them!” he stated.

On Friday a column of an estimated 4,000 migrants from Central America broke through police cordons in Mexico pouring over the border from Guatemala in an effort to reach the US.

The crowd, many carrying babies and children, smashing down the gate ran across the bridge to the Mexican border where they were met with Mexican police who used tear gas to stop the crowd only to agree to let them in later in the day.

On Thursday, President Trump, who has repeatedly asked the Mexican authorities to stop the migrants from arriving, threatened to close the US border with Mexico if the caravan kept moving on.

He also claimed that that the caravan could have been organized by Democrats.

“A lot of people have gathered and a lot of people are looking at Democrats why did they gather, there's a lot of information,” Trump said, adding that “a lot of money was being passed around so that this would normally hit just before election,” referencing the upcoming midterm elections in November.

On Thursday, Mexican officials said they had agreed with the US on a plan to set up shelters along Mexico’s southern border for anyone in the caravan who makes an asylum claim in Mexico.

US Secretary of State Mike Pompeo later released a statement in support of the plan and said that the State Department would be “ready to assist.”

“We welcome the government of Mexico's statement that they will seek cooperation with the United Nations High Commissioner for Refugees (UNHCR) to address immigration issues in the region, including the influx of people arriving in Mexico,” Pompeo said.

The migrants are fleeing Honduras where they say they have no prospects.

Many are eager to escape the gang violence they say their children are doomed to encounter as they grow up.

The issue of illegal migration has long been a stumbling block in Mexico's relations with the United States, with Trump having repeatedly pledged to build a wall on the southern border in order to stop illegal migration, as well as human and narcotics trafficking.