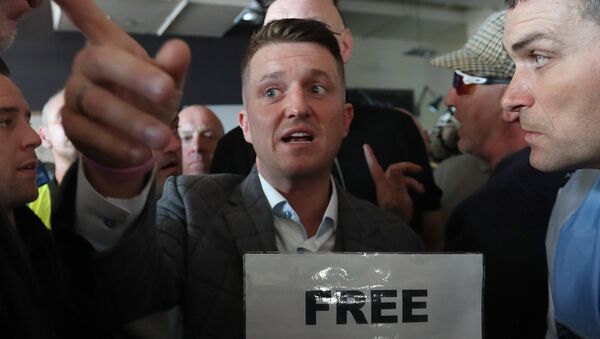 © AFP 2021 / Daniel LEAL-OLIVAS
Subscribe
Leeds Crown Court found 20 men guilty of over 120 offenses committed against 15 under-age girls between 2004 and 2011, which included rape, abuse, pimping and forced drug use. The court also lifted the reporting restrictions on the case for which right-wing activist Tommy Robinson was charged and sentenced in May 2018.

Right wing activist and journalist Tommy Robinson went on a rant against Leeds Crown Court Judge Geoffrey Marson QC and the British media following the lifting of reporting restrictions on the case of the notorious "grooming gang," that operated between 2004 and 2011.

The activist published a video on his Facebook page, where he slams the judge's earlier decision to let the suspects go on bail, which led to one of them, later convicted to 17 years in prison, escaping to Pakistan. He noted that when he was accused of reporting on the "grooming gang" case in May, the very same judge never gave him bail, which he had given to the people who "lived the life of crime."

"One of these sick child rapists is on the run in Pakistan because he was given bail. No bail for me though, they took me off the street and put me in prison inside five hours but 10 mass child rapists where 15 children gave witness statements spend a year walking the streets with your children because the establishment thought they posed no risk," he wrote on Facebook.

Robinson further steamrolled the media, which, in his opinion, challenged the reporting restrictions on the case too late. The activist said that it should have happened, when he was jailed for leaking a transcript from the courtroom hearing on the case. He also noted that only now the British media had started reporting the fact that "90%" of the gang's members were of Pakistani descent, while Robinson had been saying the same for years.

On October 19 Leeds Crown Court found some 20 men guilty of organizing a "campaign of rape and abuse" in several UK cities involving underage girls between 2004 and 2011. The gang's ringleader, Amere Singh Dhaliwal, 35, was found guilty of 54 counts, including 22 counts of rape, and jailed for life with a minimum of 18 years.

READ MORE: Tommy Robinson on UK Establishment: They Want to Make Me a Pariah

Other members received sentences between 5 and 18 years. They were involved in numerous cases of rape, abuse, human and drug trafficking, organizing prostitution, child abduction, and inciting children to engage in sexual activity. At the same time, the court admitted, that some perpetrators, involved in the case, remained unidentified, despite the testimonies of 15 girls that were abused by the gang.

000000
Popular comments
I have to say I admire this guy, he has been misrepresented and pilloried by the UK government for expressing a love for his country - something that is not PC in a society where we have to be ashamed of who we are
brwnxpng
20 October 2018, 15:31 GMT
000000
Newsfeed
0
New firstOld first
loader
LIVE
Заголовок открываемого материала
Access to the chat has been blocked for violating the rules . You will be able to participate again through:∞. If you do not agree with the blocking, please use the feedback form
The discussion is closed. You can participate in the discussion within 24 hours after the publication of the article.
To participate in the discussion
log in or register
loader
Chats
Заголовок открываемого материала
Worldwide
InternationalEnglishEnglishMundoEspañolSpanish
Europe
DeutschlandDeutschGermanFranceFrançaisFrenchΕλλάδαΕλληνικάGreekItaliaItalianoItalianČeská republikaČeštinaCzechPolskaPolskiPolishСрбиjаСрпскиSerbianLatvijaLatviešuLatvianLietuvaLietuviųLithuanianMoldovaMoldoveneascăMoldavianБеларусьБеларускiBelarusian
Transcaucasia
ԱրմենիաՀայերենArmenianАҧсныАҧсышәалаAbkhazХуссар ИрыстонИронауОssetianსაქართველოქართულიGeorgianAzərbaycanАzərbaycancaAzerbaijani
Middle East
Sputnik عربيArabicArabicTürkiyeTürkçeTurkishSputnik ایرانPersianPersianSputnik افغانستانDariDari
Central Asia
ҚазақстанҚазақ тіліKazakhКыргызстанКыргызчаKyrgyzOʻzbekistonЎзбекчаUzbekТоҷикистонТоҷикӣTajik
East & Southeast Asia
Việt NamTiếng ViệtVietnamese日本日本語Japanese俄罗斯卫星通讯社中文（简体）Chinese (simplified)俄罗斯卫星通讯社中文（繁体）Chinese (traditional)
South America
BrasilPortuguêsPortuguese
NewsfeedBreaking
20:16 GMTTwitter Removes Blue Verified Badge From Accounts of Several Afghan Ministries - Reports
20:00 GMTLaschet, Scholz Want Coalition Talks to End by Christmas
19:41 GMTCIA Was Ready to Start Firefight in London to Prevent Russia From Busting Out Assange, Media Claims
19:20 GMTSuicide Pact? Top Labour Remainer Says Party Should Campaign to Rejoin EU
18:58 GMTVideo: Miss France 2019 Confronted by 'Teenage Gang' That Threw Stones at Her in Paris
18:47 GMTFree For All! Enraged Moped Drivers Fight in London Amid Lack of Fuel - Video
18:39 GMTPSG's Kylian Mbappe Caught on Camera 'Lamenting Neymar Would Not Give Him Passes'
18:35 GMTPowerful 5.7-Magnitude Earthquake Hits Philippines' Largest Island Luzon
18:00 GMTInfrastructure Plan: Pelosi Says She 'Never' Brings a Bill to Floor 'That Doesn't Have the Votes'
17:43 GMTUsyk vs. Fury? Gypsy King's Twitter Like Leaves Fans Buzzing About Possible Heavyweight Clash
16:50 GMTLabour Leader Demands Visas For 100K Foreign Lorry Drivers Amid Global Shortage
16:33 GMTLabour Staff Cuts That Prompted Strike Ballot Due to £2m-a-Year Legal Costs
16:23 GMTDHS Chief Reveals Up to 12,000 Haitians Who Crossed Southern Border Were Released Into US
16:21 GMTTurkey Wants US Military to Leave Syria, Iraq After Afghanistan Withdrawal, Erdogan Says
16:06 GMTSPD Leads in German Election Polls With 25.8% as Merkel's Bloc on Track for Worst Result Since 1949
15:59 GMTEx-Nazi Oberlander's Case Sets Precedent for Holding War Criminals to Account in Canada
15:45 GMTFive Palestinians Reported Killed in Israeli Anti-Hamas Operation
15:38 GMTSpain's La Palma Airport Reopens After Brief Pause Over Volcanic Activity
15:37 GMTAustralian Cyclist Recreates Baby From Nirvana's Nevermind Cover Using GPS and City Streets
15:10 GMTSan Marino to Decide Whether to Lift Ban on Abortions