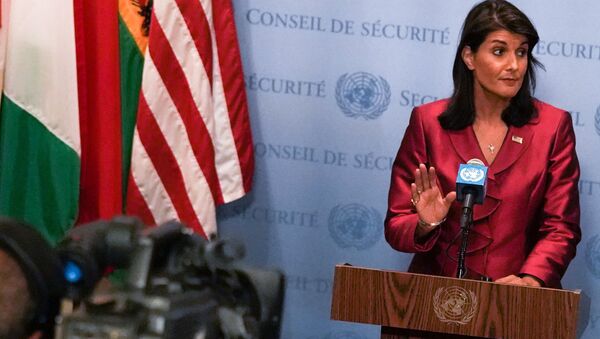 © REUTERS / Jeenah Moon
Subscribe
During the Alfred E. Smith Memorial Foundation Dinner in New York on Thursday, outgoing US Ambassador to the United Nations Nikki Haley noted that “in America, our political opponents are not evil,” a sharp contrast to US President Donald Trump’s frequent remarks that Democrats are “evil.”

During the dinner, Haley added that the "toxic political environment" has caused both parties to "describe their opponents as enemies or evil."

"In South Sudan, where rape is routinely used as a weapon of war, that is evil," she said, cited by Politico.

"In Syria, where the dictator uses chemicals weapons to murder innocent children, that is evil," the former Republican governor of South Carolina said, adding, "In North Korea, where American student Otto Warmbier was tortured to death, that was evil."

Earlier this month, Trump apologized to Supreme Court Justice Brett Kavanaugh and his family for the "terrible suffering" they allegedly underwent, adding that sexual assault accusations against him were a "hoax" committed "by people who are evil." In addition, during a law enforcement conference this month, Trump claimed that the multiple allegations against Kavanaugh were "a disgraceful situation, brought about by people that are evil" and that he [Kavanaugh ] "toughed it out."

During recent rallies to drum up support for Republican candidates ahead of the upcoming US November midterm elections, Trump has repeatedly painted Democratic opposition party members as "dangerous" and "extreme," Sputnik previously reported.

Several weeks ago, Trump announced that Haley would leave her post at the end of 2018.

The US president expressed hope that Haley would return to his administration in a different role, while Haley thanked the president for allowing her the "honor of a lifetime" to serve as the nation's UN ambassador.

"We're all happy for you in one way, but we hate to lose [you]. Hopefully, you'll be coming back at some point. Maybe a different capacity. You can have your pick," Trump offered, cited by ABC News.

000000
Popular comments
Is this the sermon of a Christian Crusade where there us fight to determine why is evil and who is not. Sounds more like a kindergarten fight to me. The level of maturity is so low, that a toddler would make wiser decision and statements. The world is in real jeopardy.