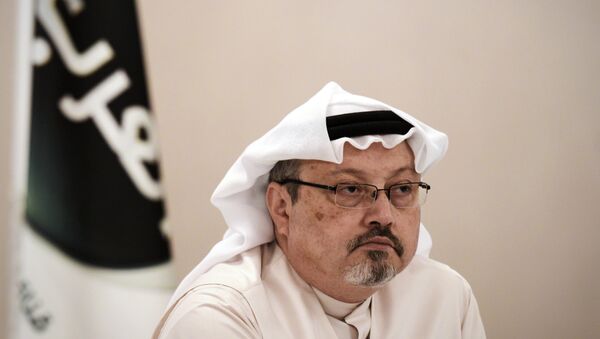 After the Saudi prosecutor-general confirmed that The Washington Post columnist Jamal Khashoggi died following an altercation in the Saudi Consulate General in Istanbul, Palestinian-Israeli foreign policy analyst and journalist Rula Jebreal published a secret interview with him for the American magazine Newsweek.

Speaking off the record to the renowned journalist, Rula Jebreal, who was working on a cover story about Saudi Crown Prince Mohammed bin Salman (MBS), the now-deceased Jamal Khashoggi dismissed the “opposition” label he’s had pinned on him.

Turkey Vows to Reveal "Whatever Happened" With Khashoggi - Ruling Party
The two appeared to have discussed the reforms, initiated by the Crown Prince under his Vision 2030 program, which breathed fresh liberal air into the highly conservative kingdom.

Riyadh opened the doors of the first movie theater after a 35-year ban, contributed to the empowerment of Saudi women, having given them the right to drive, allowed them to not wear the black Muslim robe-like dress, abaya, as well as opened sports stadiums to female football fans.

Khashoggi, however, criticized Prince Salman for his willingness to implement “white elephant projects” rather than work on the poor areas of the country.

'Saudi Arabia Giving in to Israelis'

Jebreal, who’s a Palestinian-Israeli foreign policy analyst, further wondered why Saudi Arabia hadn’t recognized the Jewish state yet given Prince bin Salman’s remark during his trip to the United States that the Israelis were entitled to a land. She also claimed that when MBS was in London, he declined the proposal to hold an off-the-record meeting with the Jewish community, because it was “too risky.”

Khashoggi responded, saying that it was the outrage among other Arab nations that made Riyadh backtrack:

“Saudi Arabia made the Arab [League] summit and called it the “Jerusalem summit” suddenly. Why did he do that? I think it is a reaction to the anger throughout the Arab world at Saudi Arabia. Saudi Arabia [is seen as] giving in to the Israelis, to the Jewish lobbies, here and there, and maybe also Saudi Arabia begins to [worry] that [President Donald] Trump cannot deliver to them what they were hoping for. So they retracted a little bit and said, ‘Oh, we are still supportive of Palestine.’”

When the interviewer suggested that the United States might change their approach towards Saudi Arabia at some point, Khashoggi agreed, albeit said that there’s always a “but.”

“I am sure the Americans are not going to apply pressure on Mohammed bin Salman [unless] a true crisis happens in Saudi Arabia.”

The death of Jamal Khashoggi was confirmed by the Saudi prosecutor-general after weeks of speculation and reports that the opinion journalist could have been killed in the Saudi Consulate in Istanbul.

While the investigation is still underway, Saudi authorities have announced that he had died in a fight with people who met him in the consular premises; 18 suspects in the assassination of Jamal Khashoggi have already been detained.