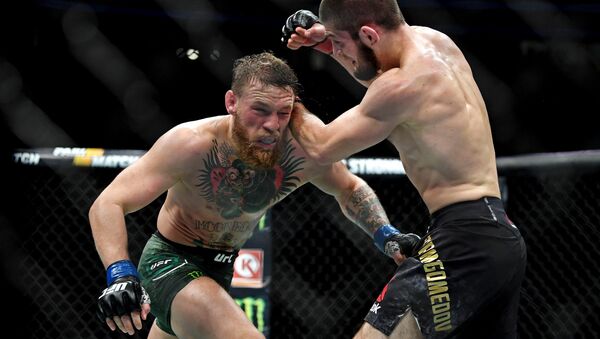 Russian UFC fighter Zubaira Tukhugov has been replaced by Michael Johnson for a matchup against Artem Lobov, which will take place on October 27 in Moncton, Canada, the UFC announced Wednesday.

“Featherweight athlete Michael Johnson will be replacing Zubaira Tukhugov in the scheduled bout against Artem Lobov at UFC Fight Night: Volkan vs. Smith, due to an ongoing investigation by the Nevada Athletic Commission,” the UFC statement read.

The Nevada State Athletic Commission is currently filing formal complaints against Tukhugov, who’s a teammate of UFC champion Khabib Nurmagomedov and who was engaged in the post-fight brawl involving the Irish MMA star, Conor McGregor, at UFC 229 on October 6 in Las Vegas.

The news has sent social media into meltdown, with many saying they would prefer to watch Tukhugov fight against Lobov, who’s on Team Conor:

We want to see more Team Khabib vs Team Mcgregor

I want @ZubairaTukhugov in this fight. Hey @danawhite what happend whith you?

Would have loved to see @ZubairaTukhugov fight! 😫

After Khabib’s win against Conor in Las Vegas on October 6, Tukhugov was filmed jumping over the fence of the octagon and sucker punching McGregor from behind:

Khabib’s team came at Conor from behind. #UFC229 pic.twitter.com/FQRk4En2hO

Shortly after the UFC 229 skirmish, Tukhugov posted a video on social media, which has since gone viral, saying that he had “slapped him as promised” to make McGregor “answer for his words,” apparently referring to an earlier verbal clash between the two.

UFC fighter Zubaira Tukhugov is bragging on social media about attacking Conor McGregor at #UFC229: “I slapped him as promised. I promised to make him answer for his words and I did." pic.twitter.com/Iy2QYlUmEt

Following the incident, UFC President Dana White said Tukhugov would be kicked out for his role; in response, Nurmagomedov threatened to quit the UFC if his teammate is banned.

In January 2018, the US Anti-Doping Agency (USADA) announced it was handing down a two-year suspension to Tukhugov, retroactive to September 26, 2016, when the news that the fighter tested positive for a banned substance, ostarine, was first announced.