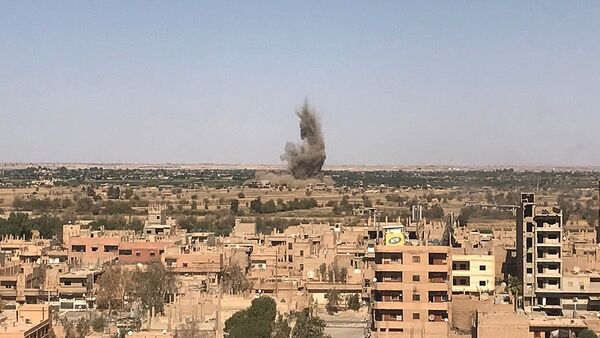 © Sputnik / Mikhail Alaeddin
/
Go to the mediabank
Subscribe
International
India
Africa
Syrian state television has reported that strikes conducted by the US-led coalition on the settlement of as-Susah in Syria's Deir ez-Zor province have led to civilian casualties.

The broadcaster, however, has not specified the exact number of civilians, who had been killed or wounded due to the strike.

Foreign Citizens Among Hostages Kept by Daesh in Syria's Hajin Area - Source
Last week, it was reported that the coalition struck the town of Hajin in Deir ez-Zor province using white phosphorus, which is banned. The Pentagon later told Sputnik that all weapons that are being used in the Syrian campaign comply with the Law of Armed Conflict.

The US-led coalition of more than 70 countries is conducting military operations against Daesh in Syria and Iraq. However, neither the Syrian government nor the United Nations have authorized the operation on Syrian territory.