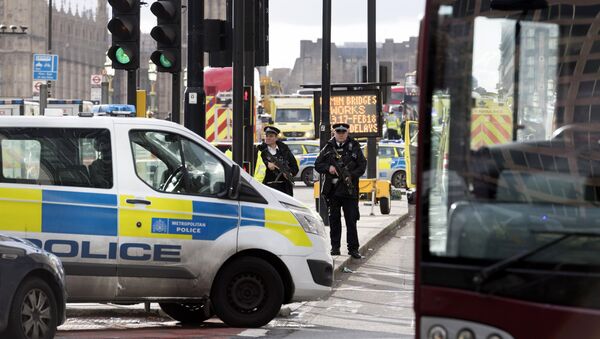 London police said Wednesday that they were investigating a suspicious package at Embankment Gardens, near the defense ministry.

"Police were called… to reports of a suspicious package at Embankment Gardens," a police spokesman said in a statement, adding that the ambulance and fire services were also at the scene. "Cordons and road closures have been put in place."

​At the same time, a Reuters photographer said that he saw a bomb disposal robot at the scene of the incident.

Police have closed off much of the Embankment, from Westminster Bridge past New Scotland Yard and the MOD pic.twitter.com/LJx46knbji

Police Launch Terror Probe as Car Hits People, Security Barrier Near UK Parl't
London has seen several such incidents over the year. On March 13, a suspicious package was delivered to one of the UK parliament buildings.

The incident happened a day after the parliament was cordoned off after the reports of a suspicious substance found in a package sent to an MP's office. The police were called and two persons hospitalized as a "precaution."

In February, London police were examining a suspicious package containing white powder, which was delivered to the UK Houses of Parliament, and later found not harmful.