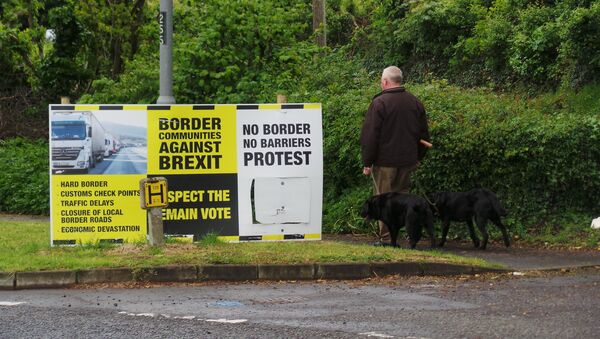 LONDON (Sputnik) - The European Union is intentionally using the Irish border issue as a means to sabotage negotiations on the UK exit from the European Union, Hermann Kelly, a spokesman for the recently-formed Ireland's eurosceptic Irexit Freedom Party, told Sputnik.

"Basically the European Commission is using Ireland as a weapon to prevent the UK [from] implementing the democratic decision of its people, which was for Brexit," Kelly said.

According to Kelly, it was very clear from the beginning that "Brexit would involve leaving the EU customs union and single market," and "it is in the interests of Ireland to have a free trade deal with the United Kingdom."

Kelly suggested that the European Union’s goal was actually to prevent the United Kingdom from trading freely after Brexit and to tie the country to the bloc.

"Why do they [the EU] want to keep the UK within the customs union? So it's not free to trade across the globe, the EU will have no competition and things will just continue as before. There's not a single party, north or south [of Ireland] or in Britain who want to impose a hard border. The only people wanting to impose a hard border are those in the European Commission," he argued.

He recalled that the European Union’s push for keeping Northern Ireland in the bloc ran against the Smart Border 2.0 report, issued by the European Parliament back in November. The paper said that it was possible to have a frictionless Irish border thanks to technology.

"That report on the Smart Border 2.0 seems absolutely ideal for looking at trade between the two parts of Ireland. But because Theresa May very stupidly even agreed to talk about the ‘backstop’ it's in the EU's interest not to agree about a free trade deal, not to talk about the Smart Border option, and they are just doing everything they can to keep Northern Ireland within the customs union," the spokesman pointed out.

Kelly suggested that Brussels was actually seeking to punish London and dissuade other nations from following its suit.

'No Grounds for Optimism' on Brexit Ahead of European Council - Tusk
Meanwhile, Ireland needs a free trade deal with the United Kingdom, the spokesman for the Irish party reiterated.

He also noted that the opposition to EU plans was voiced not only by London but also by Northern Ireland itself. He expressed an opinion that Northern Ireland’s Democratic Unionist Party (DUP), which strongly protests any deal stipulating a separate regime for the UK region, would never succumb to Brussels’ pressure.

"I think that anybody who thinks that the DUP is going to fold is in for a very big surprise. These are the people who used to deal with the IRA in the north and they had to talk to them and negotiate, so the guys in Brussels don't scare them at all. And their own voters will never accept what the EU is looking for. So I think they will be strong and resolute," he opined.

Brexit Could Be Extended by Another Year - EU Negotiator Michel Barnier
The statements come as difficulties surfaced again over the weekend around the issue of a "backstop" on Northern Ireland. The so-called backstop solution, promoted by London, stipulates that the United Kingdom will remain in the EU customs union for a limited time if the transit period ends in December 2020 without an all-encompassing deal. Brussels insists that only Northern Ireland should remain in the customs union in case no agreement was reached by that time.