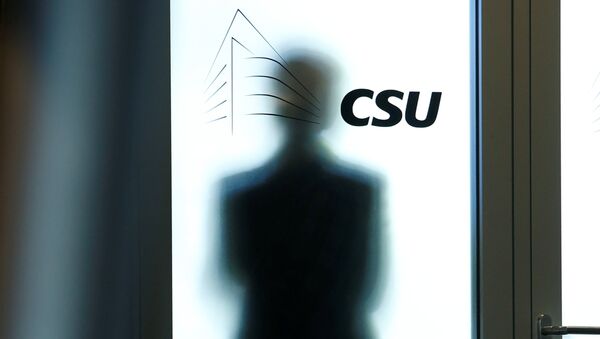 © REUTERS / Michaela Rehle
Subscribe
The Christian Social Union has faced the worst Bavarian parliamentary election results in more than sixty years. The CSU now has to form a coalition, as it has lost its absolute majority. Radio Sputnik discussed the outcome of the vote with Dr. Andreas Roedder, a contemporary history professor at Germany’s Mainz.

Sputnik: The CSU’s performance in Sunday’s vote was historically low. Why is that so?

Andreas Roedder: This is a historical election on the one hand, and not that dramatic on the other. There seems to be a kind of paradox because Bavaria is the most affluent region within Germany and in a certain way it’s the best-performing region within Germany, with a well performing government. At the same time, the election result mirrors the situation of the federal government in Germany. I think that the major reason for this bad result for the CSU is the struggle about migration between the CSU and Merkel in the Berlin government during this year and the last three years. First of all, it’s a problem of style. Many people do consent to what the CSU says but the way party Chairman Seehofer, for example, worked in the struggle with Angela Merkel was highly disregarded. First of all, it was a question of style, about the struggle between the CSU and Merkel. At the same time, it mirrors the state of the discourse of the public sphere in media and in politics in Germany. We can observe that in a certain way the CSU has been excluded from the sphere of legitimacy in German public debate.

CSU's Losses in Bavaria Can Partly Be Blamed on Berlin - Political Analyst
Sputnik: What kinds of consequences will Angela Merkel see as a result of not gaining a majority for her sister party in the region? Is that going to be a big deal?

Andreas Roedder: In a certain way it’s a very bad result for Angela Merkel since on the one hand, the losses for the sister party of the CDU mirror the decline of the big party and reflect the crisis of the CDU. On the other hand, it’s not that much of a disaster as it had been expected a couple of days before the elections so it hasn’t been bad enough just to blame the CSU for being disloyal towards Merkel.

Sputnik: Of course, they’re going to have to come up with some kind of a coalition; they haven’t really commented on that yet. It seems like they themselves aren’t sure what kind of coalition could be expected; what are your thoughts on that?

Andreas Roedder: I don’t think this is really a dramatic question. This is what I meant when I said that it’s not that much of a dramatic landslide result. There’s no landslide within the political landscape, but a landslide within a political camp. If you see that the political left, which are Social Democrats and the Greens, if we count them together, they’re about one third of the electorate and this is what the left camp has always had. They have always gained in Bavaria, there’s just a major exchange between the Social Democrats and the Greens. The same is true for the center right. We have this historically bad result for the CSU; but if you count the CSU, the Liberals and the Free Voters together, they gained 54 per cent. And if you add the non-radical votes of the AfD, this would mean about 60 per cent. So, there is a comfortable majority, an absolute majority for the center right camp in Bavaria. What I guess is that we’re going to see a coalition between the CSU and the Free Voters, and things won’t change too much in Bavarian politics.

Germany's AfD Party Asks Schoolchildren to Expose Politically Biased Teachers
Sputnik: What about the 11 per cent result for the AfD?

Andreas Roedder: The AfD is massively establishing as a parliamentary party which obviously isn’t going to disappear again. There is just one state within Germany where there’s no representation of the AfD in the parliament, this is the State of Hessen; and Hessen is going to have elections within two weeks. So, we are seeing that the AfD is establishing in Germany and there will be a twofold question – how the AfD will cope with the nationalist wing within the party; and how the other parties will cope with the AfD, depending on how the party is orienting itself.