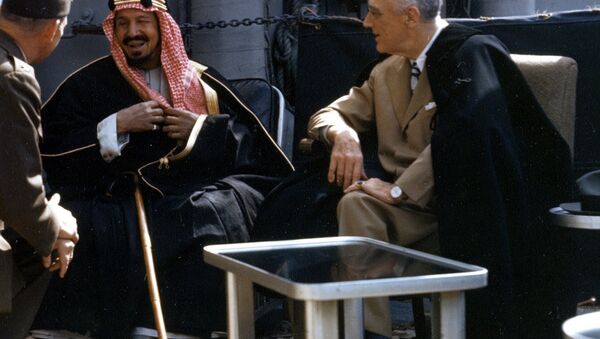 © Wikimedia Commons; U.S. Army Signal Corps
Subscribe
As the Saudi-Turkish investigation into the fate of Saudi journalist Jamal Khashoggi continues, US Secretary of State Mike Pompeo has visited the governments of both countries to relay the sense of gravity with which the US weighs the situation.

Saudi Arabia Remains Important US Ally Amid Khashoggi Case - Official
On Tuesday, Pompeo had "direct and candid" talks with King Salman, the king's son, Crown Prince Mohammad bin Salman, as well as Saudi Foreign Minister Adel al-Jubeir in the Saudi capital of Riyadh. Pompeo "emphasized the importance of conducting a thorough, transparent and timely investigation, and the Saudi leadership pledged to deliver precisely on that."

Then on Wednesday, the president's top diplomat paid a visit to the Turkish government in Ankara's Esenboga airport, where he met with Turkish President Recep Tayyip Erdogan and Turkish Foreign Minister Mevlut Cavusoglu for about 40 minutes, the latter of whom described the meeting as "beneficial and fruitful."

Meanwhile, Turkish authorities searched the home of Saudi Consul General Mohammad al-Otaibi in Istanbul a day after he fled for Riyadh. Investigators say Khashoggi was beaten, drugged, killed and dismembered within minutes of entering the consulate. The search followed on one Monday done in conjunction with a Saudi delegation, in which samples were collected from the garden area, Middle East Eye reported.

The New York Times also reported Wednesday that an audio recording had emerged of Khashoggi's murder in which Al-Otaibi could be heard telling those allegedly torturing Khashoggi: "Do this outside; you're going to get me in trouble," to which one of the Saudis reportedly replied: "Shut up if you want to live when you return to [Saudi] Arabia."

Radio Sputnik's Loud and Clear spoke about the development of the affair with Thomas Lippmann, an award-winning journalist and author who has written about Middle Eastern affairs and US foreign policy for more than 40 years, specializing in Saudi issues. His books include "Inside the Mirage: America's Fragile Partnership with Saudi Arabia." He's also a non-resident scholar at the Middle East Institute in Washington, and he's the former Washington Post bureau chief for both the Middle East and Vietnam.

​Many have been speculating in recent days what the effect of the Khashoggi affair will have on the political position of Saudi Crown Prince Mohammad bin Salman in the country behind whose throne he became the power only a little over a year ago.

"I try never to speculate on the internal political dynamic of the Saudi ruling family," Lippmann told hosts John Kiriakou and Brian Becker. "That's the only family that matters in Saudi politics, and they almost never talk about their own conversations with each other and what the thinking is in the family."

"By all accounts," the journalist said, "in domestic terms, Mohammad bin Salman is in full and unchallenged control. That depends, though, it seems to me, on the credibility of his aspirations for continued prosperity and improved life and employment chances for the people of Saudi Arabia, on which he has tried to build his reputation. If there really were to be an international backlash that led to investors pulling out, cutoff of substantial foreign investment in Saudi Arabia, Saudis, rich families, moving their money out of the country — which I understand is already happening at an accelerating rate — then those economic plans become even more difficult to fulfill than they are in good times. What the effect of that would be is really hard to tell."

Lippmann noted that the Saudi state doesn't respond to the same public proclivities as "any Western society," because it has no effective parliamentary body, and so it hasn't faced the problem of its war in Yemen, an expensive conflict "they're not winning and probably can't win," that a country like the US or UK might face. "Saudi Arabia's not any other country," he said, "the government seems to have really persuaded the Saudi people that the war in Yemen is a war of necessity — that is to say, a war they have to fight to prevent Iran from establishing a beachhead on their southern border."

"A lot of people in Washington are looking for some way to demonstrate righteous indignation about this, to show they're on the right moral side without actually having to do anything that would disrupt the basic US-Saudi relationship. So a lot of people are saying things," like Sen. Lindsey Graham (R-SC), for example, who called for Mohammad bin Salman's removal from power on Fox News Tuesday. Lippmann said Graham probably "didn't think much of the optics of that glad-handing session between Pompeo and the prince — but when did this administration ever care about the optics?"

Becker noted how Trump compared the situation to the confirmation hearing of Supreme Court Justice Brett Kavanaugh, who Trump opined was similarly portrayed in the media as "guilty until proven innocent" after Kavanaugh was accused of sexual misconduct and rape by several women, threatening his confirmation to the nation's highest court.

"Remember what happened," Lippmann said, "the president's first foreign trip after he became president was to Saudi Arabia, and the Saudis flattered him in every way which, he ate it up, and they had him looking into that glowing orb and really feeling that he had found some kind of — don't know, soul mate — in Saudi Arabia. And Mike Pompeo works for him."

"Remember that in the 75 years of this peculiar alliance between the United States and Saudi Arabia, the two countries had many deeply serious, profound differences, over many subjects," the journalist pointed out. "The United States has never — not once — put this relationship on the line over the fate, or the human rights of, any individual or group of individuals. In fact, the Truman administration put a policy in writing that said exactly the opposite. It said: ‘We're there to do business and for reasons of security. We're not there to tell them how to run their country or organize their society.' That policy's never been rescinded, and that's what we have always done."

In 1992, the Washington Post reported on a newly uncovered top-secret 1947 State Department cable between US President Harry Truman and King Abdulaziz ibn al-Saud, in which the former pledged, "One of the basic policies of [the] United States in [the] Near East is unqualifiedly to support [the] territorial integrity and political independence of Saudi Arabia." The message followed negotiations between ibn Saud and Truman's predecessor, Franklin Delano Roosevelt, in 1945 that laid the basis of the US-Saudi alliance.

"And so they have political prisoners, they have drumhead justice, they have kangaroo courts, they have arbitrary roundups, and if you want proof, just look at the annual reports from the State Department about the human rights conditions in Saudi Arabia. They're ghastly. But those reports have never affected strategic or economic policy, and I don't think they will now," Lippmann said.

"Even [former US President] Jimmy Carter, who made human rights the cornerstone of his foreign policy, was deferential to the Saudis. I was there in Washington, in Riyadh when he was there, and why was he? Because he wanted something from them. It wasn't oil, it was endorsement of the Egyptian-Israeli peace initiative," which became the Camp David Accords in 1978.

"There's always something that we want from them and that they want from us, and that's why the relationship survives."