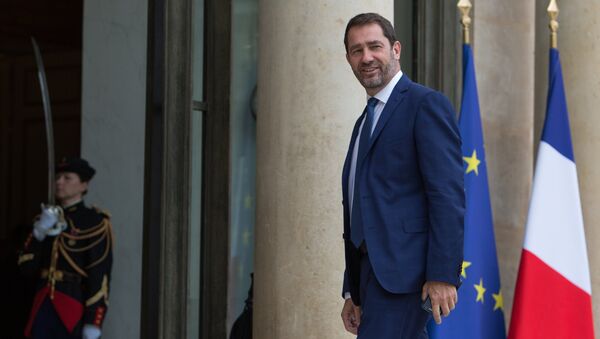 President Macron has appointed En Marche! party chief and ex-presidential spokesman Christophe Castaner as his new interior minister in a major reshuffle in the wake of a series of high profile resignations. Sputnik offers a summary of what you need to know about the new face at one of France's most important cabinet posts.

Castaner, 52, was a member of the Socialist Party for decades before resigning and joining Macron's En Marche! party in 2016, has quickly proved himself as one of the president's most enduring allies, serving as presidential spokesman between May and November 2017, as secretary of state for parliamentary relations since May 2017, and as En Marche's chief since November 2017 after resigning from his job as presidential spokesman.

Macron Names Governing Party Chief New Interior Minister in Reshuffle
More telling than his official job titles is the politician's public record, which includes extreme antipathy to the French and European right, and loyalty to the president against both the opposition and the media over Emmanuel Macron's insulated approach to the presidency.

In August 2018, Castaner attacked Italian interior minister Matteo Salvini, calling him a "demagogue" and accusing him of "advancing his political cause" instead of mourning the Genoa highway bridge collapse after Italy repeatedly denied entry to the Aquarious migrant rescue boat.

A month later, Castaner stepped up his attacks, this time lashing out against all of Europe's populist politicians, including Hungarian Prime Minister Viktor Orban, Salvini and National Front leader Marine Le Pen, accusing them of being "arsonists" seeking the collapse of the European Union. Calling the trio "demagogues," the politician charged them with being "enemies of Europe and enemies of the people of Europe."

Castaner's clashes with Le Pen over both ideology and policy go back to the 2017 presidential elections, and culminated this summer, when the two exchanged barbs on the sidelines of parliament over the Benalla Affair. The scandal, which involved former presidential bodyguard Alexandre Benalla and his unprovoked attack on May Day demonstrators, as well as the effort by Elysee Palace to cover it up, sparked a crisis of confidence in the presidency. Clashing with Castaner outside parliament, Le Pen charged him with gutlessly making a prepared statement to the press instead of going "into the National Assembly to explain the state scandal that is taking place." The whole exchange was caught on video.

In late March 2018, Castaner revealed to a French broadcaster that Paris was expecting to take back over 250 former Daesh (ISIS)* fighters from Syria and Iraq in the wake of the collapse of their so-called caliphate. "I think, we should watch them closely, accept them, and imprison them if they have committed any crimes, to find out how dangerous they are," the politician said.

Castaner's comments seemed to contrast with an earlier hardline, 'take-no-prisoners approach' to the issue which he expressed in October 2017. At that time, as a government spokesman, he warned would-be jihadists that joining Daesh and going abroad to wage war "brings risks, and they must accept those risks."

Secrecy on Syria…and Other Things

A firm supporter of the president's Syria policy, which has included bombing the war-torn country over baseless allegations of chemical weapons use, Castaner gave French media a sense of Macron's penchant for secrecy by saying he would refuse to inform the public in advance on France's planned airstrikes.

"If the strikes are decided on, I will not tell you. And the president of the republic will not tell you," Castaner bluntly said, speaking to a French journalist, adding that France's legislative authorities wouldn't find out either until "the time comes." France went ahead with the strikes, along with the United States and Britain, on April 18, but they proved to be a failure anyway, as the Russian defense ministry reported that 71 out of the 103 missiles launched were destroyed by Syrian air defenses.

France Ready to React in Case of Proven Use of Chemical Weapons in Syria – FM
Castaner was subjected to criticism by the French press almost immediately after taking up his post as presidential spokesman. Amid media claims that Macron had barricaded himself off from the press, Castaner insisted that the new policy was aimed at ensuring "an efficient dialogue with the people," not media control.

In August 2017, three months after Macron's assumption of the presidency, Castaner again defended Elysee Palace policy, urging the media to simply "get used to" a situation where the president does not regularly speak to the press, and justifying the decision by saying that "the president has decided to be an actor, not a commentator."

Macron's tendency toward centralization and a highly polished media image is something that has been criticized not just by France's opposition politicians, but even former Macron allies. Earlier this year, former Macron supporter Corinne Lepage accused the president of running a 'Soviet-style' "democratic centralism" approach to politics, "completely vertical, and also very masculine." According to the National Interest, Castaner, serving as the vessel through which Macron chose to speak during much of his first year in office, played a crucial role in this approach to governance.

Castaner's move to the interior ministry is part of a much bigger shuffle in the Macron government. The president's ministers of agriculture, culture, and the department of overseas territories have all been sacked and replaced in bid which Elysee Palace has said is aimed at ensuring "continuity and stability to maintain the pace of reform." These reforms include the tax code, labor law, benefits, and a controversial pension reform scheme. At his new post, Castaner will be in charge of implementing immigration policy, with Macron recently swinging right to account for growing public discontent over the ongoing European migrant crisis.

Reacting to Castaner's appointment, Marine Le Pen tweeted her disappointment, quipping that "with Emmanuel #Macron, the worst is always a certainty."