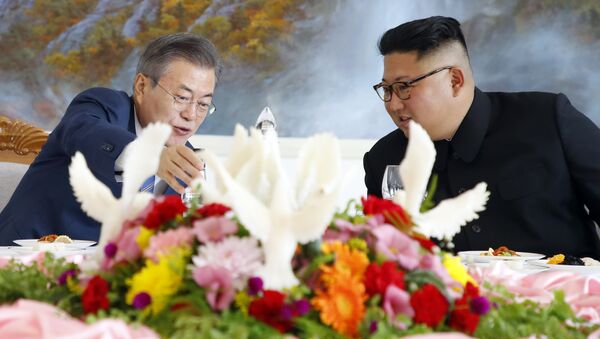 North Korea, South Korea, and the United Nations Command (UNC) held their first three-way talks on Tuesday; they were planned a month ago, when the two countries agreed on disarming the border.

World
North Korea Seeking to Expand Ties With Russia - Foreign Minister
The closed meeting took place at the border village of Panmunjom between colonel-level military officials from each side, a statement from the ministry said. The two Koreas are aiming to dismantle 11 posts within a 1 km radius of the Military Demarcation Line by the end of the year, with more guard posts and landmines to be gradually removed later.

Other agreements considered removing mines in the small zones and building roads for the pilot project of excavation of the remains of the soldiers missing from the 1950-53 Korean War, which is set to start in April 2019.

Both sides also agreed to withdraw all firearms from the Joint Security Area (JSA) at Panmunjom, keeping only 35 personnel from each side in this zone and share information about their surveillance equipment. The JSA would also become one of the few areas with free access for tourists.

“Most of the operations will actually be executed by the two Koreas, but ensuring UNC support matters, as it has US elements and also manages the Military Armistice Commission,” a South Korean military source said on condition of anonymity.

North Korea’s Kim Hopes for ‘Great Progress’ at Next Trump Summit – Reports
The measures are aimed to be carried out over the course of one month and aim to transform the border into a “place of peace and reconciliation,” South Korea's defense ministry has said. The two nations also agreed to begin reconnecting rail and road links.

North and South Korea are still technically at war, as a treaty formally ending the Korean War was never signed. However, according to the Washington Post, the two Koreas are planning to hold more bilateral talks on increasing military engagement to reduce the threat of conventional warfare, put forward a joint bid to host the 2032 Summer Olympics on the Korean Peninsula, and about facilitating contact between families that were divided by the war more than 60 years ago.