Every Nut Finds a Squirrel: Twitter at it Again Over Fluffy Critter's 'Cleavage' 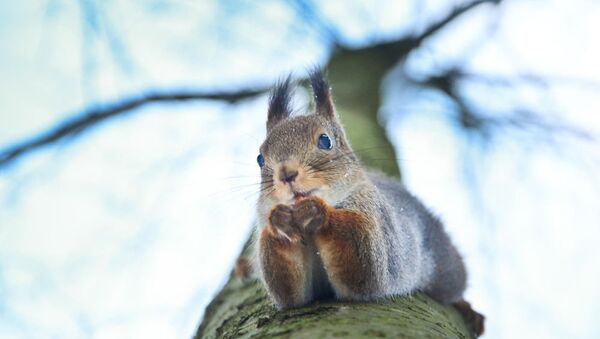 © Photo : Konsta Punkka/ Instagram
Subscribe
International
India
Africa
A fluffy rodent from an animal park in Tokyo has become an Internet sensation after a Twitter user shared a picture, he dubbed “a sexy squirrel “. All thanks to its unusually large human-like furry breasts, the little creature is not ashamed to let out.

A Twitter user with the handle @boblim1204 has posted several shots of “a sexy squirrel,” he spotted in Tokyo’s park. The image with a small and oddly voluptuous rodent has prompted a huge response on social media. The photo shows the squirrel appearing to press its human-like bosom together, it was shared more than 45 thousand times.

​I went to a squirrel garden today and could take a photo of a sexy squirrel.

​The big-breasted squirrel has immediately gained its own fandom on social media.
Some tried to find its human doppelgangers.

​Others had an issue with the squirrel being topless and set #getabra hashtag going.

maybe she need a piece of bra

​Some pointed out that it’s usually squirrels’ nuts people are thinking about.

The Internet is going wild over pictures from a Japanese zoo of a squirrel that appears to have large breasts. Said the squirrel:

'Well, you know, it's kinda weird cuz usually it's my nuts that people…Hey!! My eyes are up here!' pic.twitter.com/sSg4rpfVuW

Man, I'd give anything to see even a squirrel with normal-sized breasts. I haven't seen a single squirrel since I came to Japan…

​There were those who made a reference to some topics of heated debates.

Please can you stop body-shaming this squirrel with breasts. Thank you. pic.twitter.com/YCg2MktjFn

​The newly-born Internet celebrity inhabits a special squirrel garden at Tokyo’s Inokashira Park Zoo where little creatures move freely and can be easily photographed. The user, who scouted this furry beauty, seized an opportunity to promote the location as a “relaxation place.”

However, Sputnik, of course, has no way of knowing whether these breasts are real or implants.