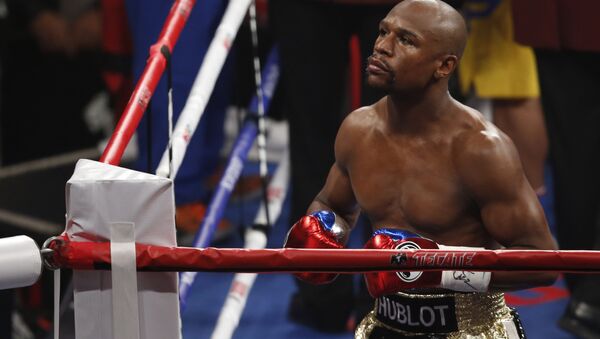 Khabib called out Mayweather a week after his defeat of Irish MMA legend Connor McGregor, pointing out their 50-0 and 27-0 undefeated records, and taunting Floyd saying that "in the jungle, there can be only one king, and that is me." Nurmagomedov and Mayweather have each defeated McGregor in the ring, Mayweather in the boxing ring in August 2017 and Nurmagomedov in the MMA octagon on October 7.

With details on the possible fight sketchy at best, social media users have engaged in an outpouring of excitement, with some making an elaborate effort to comically piece together its expected outcome.

Khabib at 27-0 challenges 50-0 Floyd Mayweather…..Would you want to see it? I would pay a decent amount to watch that

Khabib now trying to secure a Mayweather fight. Floyd is on it aswell. Mad 🤷🏽‍♂️

Mayweather's fans rushed to defend the champ, suggesting that Khabib was just "lucky" against McGregor and saying he wouldn't last in a boxing ring.

Khabib lands one overhand right and all the sudden becomes the #1 challenger to Floyd Mayweather. Makes sense.

Why would you pay to see someone who isn't good at boxing vs someone who is the most defensive boxer in history. At least Conor had a puncher's chance. Khabib would get destroyed. He also couldn't build up a fight to save his life. No point.

Omg this dude khabib really thinks he can stand with Floyd Money????🤣🤣

Khabib's fans were no less confident, making Rocky 5 references and suggesting that surely Khabib would emerge from a match with Mayweather victorious.

Others remain skeptical about the whole story, however, saying they weren't sure if the fight is legit, that it was ridiculous to expect a matchup between a boxer and a wrestler, or commenting on the all-important financial details of the bout.

If it's in a ring. Mayweather. Cage. Nurmagomedov. Pointless fight. Make it a neutral sport. Tiddlywinks. That's the sort of respect this idea deserves.

THEY ARE TWO DIFFERENT SPORTS! We saw this!Exhibition! already. Money grab and spotlight/headline move only.

How about let's stop talking about a nonexistent Khabib Nurmagomedov vs Floyd Mayweather matchup.

He has all of Russia watching him