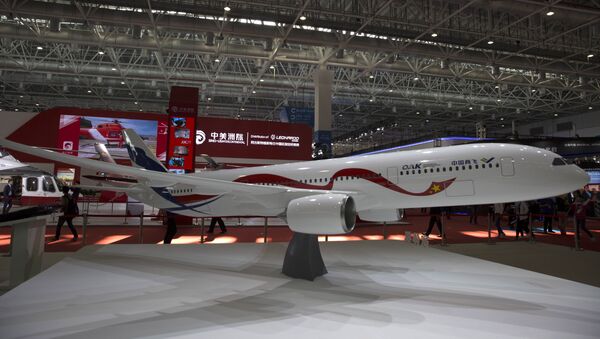 Genghis Khan Airlines mainly operates from Hohhot Baita International Airport and was approved for operations in March by the Civil Aviation Administration of China (CAAC).

To meet the transportation needs of passengers throughout Inner Mongolia, the airline hopes to build a fleet of 25 ARJ21 aircraft operating 60 services to 40 destinations in five years, with additional plans to expand to 50 planes operating 150 services in 80 locations in eight years.

Rolls-Royce Seeking to Become Engine Provider for Russia-China Wide-Body Plane
The ARJ21 is a twin-engine commercial jetliner with 78 to 90 seats and a flight range of up to 3,700 kilometers. The ARJ21-700 is built for flying in the dry climates of western China and has been in service for over two years, with Inner Mongolia remaining a key testing ground for the planes.

Hao Yutao, Genghis Khan Airlines chairman said: "The ARJ21 aircraft has great performance under ultra-low temperatures and it is suitable for takeoff and landing at plateau airports in western China, which is in line with the requirements of the aviation market in Inner Mongolia."

Hao also said that his company would like to "enrich the flight networks" as Inner Mongolia's first regional airliner.

"China's regional aviation market is still in its initial stage of development," said Li Guijin, professor at China's Civil Aviation Management Institute. "Most plateau airports globally are located in western China, and China is a great market with rich opportunities for the growth of the regional aviation sector."

The move came after Genghis Khan Airlines inked an aircraft purchase agreement with COMAC in Beijing for ARJ21-700 planes, and will cooperate further on airplane operations, service and maintenance, and training agreements.

COMAC will also establish a center in Inner Mongolia to provide maintenance for the new ARJ21s, with future plans to service China's domestically manufactured C919, which is set for use in 2021. It will additionally service the wide-bodied CR929 aircraft which is under development between Chinese and Russian engineers.