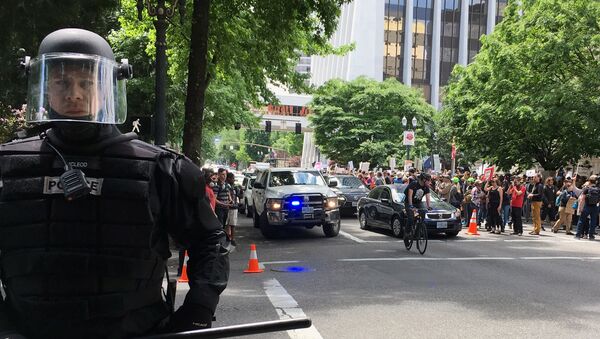 © AP Photo / Kristena Hansen
Subscribe
Members of American far-right group Patriot Prayer were discovered with a cache of long guns on a rooftop of a building ahead of a protest in Portland in August, police said Monday.

Portland police told reporters at a press conference on Monday night that they had discovered and seized firearms prior to Patriot Prayer's August 4 rally. Authorities said that the people to whom the guns belonged had concealed carry permits and were therefore not arrested. Eventually, they were even given their guns back. Portland Police Bureau Assistant Chief Ryan Lee said that the guns were confiscated by police, according to local media.

But in a statement on Tuesday, the police department used a different verb — "inspected" — to describe how police handled the guns. "Four individuals were located on the northeast side of the top floor of the garage," police said. "The men were compliant and allowed the sergeant to inspect the weapons."

"The sergeant told the men to store the weapons in a locked storage container in the back" of their pickup truck and to place the ammunition "away from the weapons in a different part of the truck," police said, adding that a "further review" determined "that no firearms were seized or taken as safe keeping."

The August protest saw face-to-face confrontation between right-wing groups like the Proud Boys and Patriot Prayer and left-wing socialist, anti-fascist and Black Lives Matter groups, with some small scuffles erupting.

The majority of the violence was enacted by the police, demonstrators told Sputnik News at the time. One protester said that police were shooting what are believed to be sting-ball grenades at demonstrators in violation of police procedure. Three people were hospitalized in response to police crowd control methods, with injuries including third-degree chemical burns, open wounds and a traumatic head injury.

Portland Police Chief Danielle Outlaw later bragged that her officers ‘kicked your butts' in a message to left-wing demonstrators.

Throughout the day of the protest, the Portland Police Bureau tweeted out pictures of objects they had seized from protesters that could be used as weapons, including flag poles and shields. The gun seizure, however, was not announced prior to the Monday news conference.

The subject of the press conference was a new rule in the city, approved by Mayor Ted Wheeler but still under review by attorneys, that will give police more power to regulate protest activity. Demonstrations in the city have been marred by violence over the past couple of years.

While the ordinance "expressly provides that the regulations cannot be based on the content of any beliefs expressed or the attire or appearance of the participants," local groups such as the Portland branch of the Democratic Socialists of America (DSA) don't believe that the rules will be enforced even-handedly.

"Make no mistake — if passed, this ordinance will only be used to strengthen and justify repression against anti-racist, anti-fascist protests while continuing to create protected spaces for fascists to spread their violent ideas," Olivia Katbi-Smith, co-chair of the Portland branch of the DSA, told Sputnik News.

"While I have little faith in our elected city officials, I hope that the commissioners have the sense to vote against this authoritarian proposal," she added.

"The mayor's proposal grants broad authority to the mayor's office to regulate constitutionally-protected speech and assembly with no meaningful oversight for abuse," Mat dos Santos, legal director at the American Civil Liberties Union of Oregon, tweeted.

"We suspect that this rushed proposal will be met with public outcry and demonstrations. And, inevitably, this ordinance will get challenged in court. To be clear, we already have laws against street fighting and violence," dos Santos added.

In response to requests for comment, the Portland Police Bureau said a statement would be issued shortly. So far, no further statement has been made.

"Now Mayor Wheeler wants to make it even easier for Chief Outlaw and the Portland Police to restrict protests that counter these violent fascists, and is using the horrifying news about armed Patriot Prayer members gathering on a rooftop to bolster his cause, news that the city has been sitting on quietly until now," Katbi-Smith said.

"This news serves as further proof that the Portland Police can ignore or outright enable the violence of the right wing while targeting the left and lying to the public and face absolutely zero consequences from our spineless mayor," she added.

Two days prior to the Monday announcement of the ordinance, anti-fascists and members of the Proud Boys and Patriot Prayer brawled outside of a bar in the city after Patriot Prayer leader Joey Gibson led a march protesting police's lax response to small protests days prior against police brutality, with the right-wing groups using batons and both the left and right-wing brawlers deploying pepper spray, freelance journalist Michael Bivins reported. Additionally, a left-wing protester was kicked while already on the ground and then had his face stomped on by another right-winger.

Police broke up that fight with a grenade that emits pepper spray as four members of the right-wing faction pounded on a lone left-winger, but officers were criticized for not making any arrests.

"Over and over again, Portlanders have watched as our millionaire mayor and his police force have protected fascist demonstrators who wear shirts that say ‘Pinochet did nothing wrong' while demonizing and brutalizing anti-fascists who turn out to defend our most vulnerable communities," Katbi-Smith said.

The day prior to the brawl, members of the Proud Boys beat anti-fascist demonstrators in New York City. The Proud Boys are described by their founder, Gavin McInnes, who is also one of the two founders of VICE News, as a "gang" with absurd hazing rituals and tiered levels of membership, the highest of which is for members who "get arrested or [participate] in a seriously violent fight for the cause."

The New York Police Department is currently on the hunt for nine members of the Proud Boys and three anti-fascists after reviewing footage of the brawl, some of which features McInnes wielding a sword. On Sunday, he seemed unperturbed by members of his gang carrying out various assaults. "I have a lot of support in the NYPD, and I very much appreciate that, the boys in blue," he said on his podcast "Get Off My Lawn."