‘You Ain’t Gonna Make It!’: US Trucker Ignores Sign, Tumbles Down Mountain 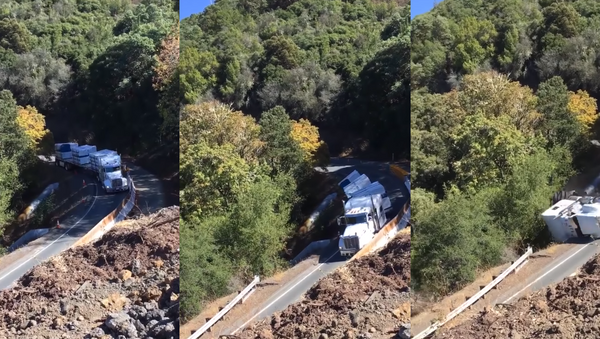 Most motorists in the US are guilty of fudging the numbers when it comes to abiding by traffic guidelines, but few end up paying for their negligence like this trucker in Hopland, California.

According to the videographer, who recorded the incident from his office near the highway, there are multiple warning signs that say "no vehicles over 39 feet allowed." Ignoring the postings, the big rig is seen first losing its payload before eventually sliding down the mountainside, leveling numerous trees in the process.

Thankfully, the footage owner claims the trucker "was not injured" in the accident and even "sat with [the driver] for about 15-20 minutes before CHP or medical personnel arrived at the scene to ensure he wouldn't go into shock."