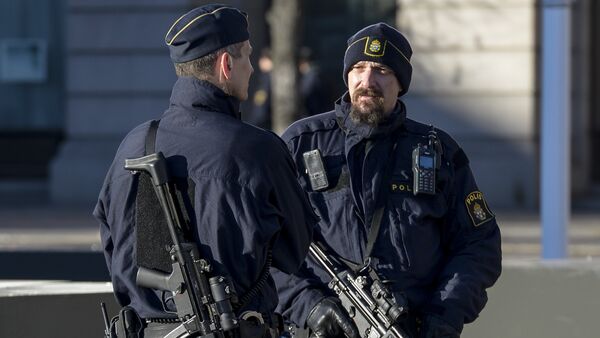 In order to make criminals think twice before pulling the trigger, the Swedish Police Authority together with the City of Malmö and the Swedish Prison and Probation Service have presented a new project called "Stop Shooting," prompting the mockery of fellow Swedes.

The new Swedish police initiative, intended to put an end to shooting sprees, has become a laughing stock among local internet users. Wisecrackers have compared it to a previous campaign to stop sexual harassment, in which girls were handed out "don't paw me" bracelets, which also prompted widespread ridicule and doubt.

According to a police press release, the initiative is based on the Group Violence Intervention (GVI) strategy borrowed from the US, where, officials claim, it achieved positive results. It was partly credited with a drop in the murder rate among young people in Boston, which fell 63 percent. Now, the Swedish authorities hope it will help alleviate the situation in Malmö.

"Due to the situation in Malmö, the timing is perfect for us to run operational measures. It is important for us to relate to proven research, and the results in, among others, the United States have been very good," Stefan Sintéus of the Malmö Police said.

According to the press release, the method is to "break down the group dynamic that foments violent behavior" and "replace it with a dynamic that takes into account the negative consequences that follow a violent act and the benefits of ending the violence." This, they hope, can achieved via so-called "call-ins," that is, targeted meetings with the police, prosecution and social services, during which selected risk group members are informed of the consequences of their actions. In the US, these face-to-face meetings are credited with creating collective accountability, fostering internal pressure and offering group members an "honorable exit."

Despite Malmö suffering from gang-related violence and the fact that deadly shootings have more than doubled between 2013 and 2017, the "Stop Shooting" initiative was met with public ridicule. A common pattern was comparing it to a previous anti-harassment initiative, when young girls were handed out bracelets with the inscription "don't paw me." In a twist of bitter irony, rapists were later reported to be wearing the very same bracelets in a mockery of justice.

"Please, say this is a joke," Benjamin Dousa, the leader of the Moderate Youth League tweeted.

​To this, another user sarcastically replied that the anti-shooting appeal must be completed with "Please" for more effect.

"Works better with 'Start Shooting.' That is, letting the police do it," yet another user commented.

User Torbjörn Jonsson argued that the whole campaign reeked of Dan Eliasson, the former police chief credited with launching the notorious "don't paw me" bracelets, and suggested that a catchier name, such as "Thug in a cage," would work better.

Yet another user reacted to the green color of hands on the "Stop Shooting" poster and wondered whether Pepe the Frog, the perennial protagonist of numerous internet memes, was its sponsor.

Still, other users were hopeful that the new campaign will help curb the deadly violence.