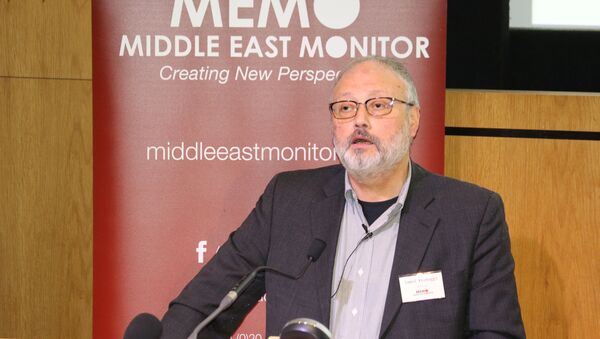 © REUTERS / Middle East Monitor/Handout
Subscribe
International
India
Africa
WASHINGTON (Sputnik) - The Embassy of Saudi Arabia in Washington, DC announced in a statement it will not hold the celebration of the National Day on Thursday after reports emerged about the murder of Washington Post columnist Jamal Khashoggi in the Saudi Consulate in Istanbul.

"Please be advised that the reception for the National Day of the Kingdom of Saudi Arabia on Thursday, October 18, from 6:00 pm-8:00 pm has been canceled," the Saudi Embassy said in an email to invitees as quoted by Politico.

World
US Lawmakers Dismiss Trump’s ‘Rogue Killers’ Theory of Khashoggi’s Disappearance
Earlier on Monday, US media reported Saudi Arabia was preparing a report in which it would admit Khashoggi was killed during an interrogation that went terribly wrong and was conducted without clearance and transparency.

President Donald Trump suggested earlier in the day that Khashoggi could have been murdered by rogue killers. Trump emphasized that the Saudi government has denied any direct involvement in the incident.