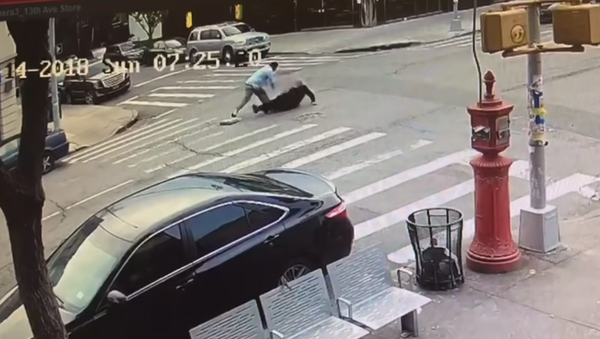 © Screenshot/Jewish Life
Subscribe
Lipa Schwartz, a 62-year-old Jewish resident of New York City's Brooklyn borough, was heading over to his local synagogue for the Sunday morning service when he suddenly became the victim of a livery driver's rage.

The violent incident took place around 7:30 a.m. local time near the intersection of 46th Street and 13th Avenue. Released surveillance footage shows 37-year-old Farrukh Afzal speeding toward Schwartz, slamming on his brakes, and then chasing Schwartz into the middle of the street before physically assaulting him.

​After Schwartz falls onto the ground during a brief foot chase, Afzal picks him up by the back of his jacket and punches him twice before pushing him back on the ground. Two additional blows are dished out on Schwartz before a member of the Hasidic community approaches the scene in an attempt to end Afzal's attack.

Although the man's efforts did prove successful, it ultimately left him being chased by Afzal as a beaten Schwartz tried to get his bearings.

"I feared for my life. I knew it's either I fight myself out of this, or I might be dead," Schwartz later told blog BoroPark24. "Burich Hashem I'm out of the hospital with some minor bruises, but the trauma of being attacked by someone who seemed to want revenge will stay with me forever."

Once Afzal was arrested by officers with the New York Police Department, Schwartz told ABC 7 that he confronted him, looking for an explanation. "I went to him when he was handcuffed, 'What did I do to you that you tried to murder me? Tell me,'" Schwartz said. "He didn't answer back."

Schwartz was taken to the Maimonides Medical Center with minor cuts and bruising on his head.

Though Schwartz did tell ABC 7 that he believed Afzal attacked him because he was Jewish, prosecutors told the New York Post that Afzal acted out after Schwartz reportedly punched his car's window when he previously passed by him at another intersection. Authorities do not believe that Schwartz's religious background motivated the attack.

The New York City Taxi and Limousine Commission told the Post that Afzal is not licensed by the agency and has previously been summonsed for being an unlicensed taxi operator.

David Sears, a spokesperson for the Breslov Center, told Sputnik Monday that the incident was just the latest to take place in recent years in the Brooklyn area.

"My understanding is that none of these attacks are part of any concerted effort but are random incidents of anti-Semitism perpetrated by people of various backgrounds," Sears said. "We are glad that this criminal was arrested and trust that he will be prevented from repeating such acts of violence."

"But the long-term solution to such hatred must be the quest for peace in the Middle East, an end to hateful propaganda everywhere, and the ongoing encounter of people of good will from different faiths to establish friendship and understanding," he added.

Afzal, who police say has had eight prior arrests, was arraigned late Sunday on charges of attempted assault in the second degree, assault in the third degree, menacing and harassment. His bail was set at $15,000, according to the Post.

000000
Popular comments
Of course the Jewish liar interviewed tried to blame it on "anti-Semitism". Just like the Palestinians who object to Jews killing them and stealing their land and homes are anti-Semitic, if they were only not so hateful, they would give all they have to the Jews willingly! If there was any hate here, it was when the Jew supremacist (*all* Orthodox are Jew supremacists, to an extreme degree) pounded on the Arab's car window, that was the hate crime. Jews think they can rob the world and get away with it - because, largely, they do.
Cal Dre
16 October 2018, 05:37 GMT1
000000
In the soviet union that would have been a death penalty offence.
Eurofolk radio girl
16 October 2018, 14:21 GMT
000000
Newsfeed
0
New firstOld first
loader
LIVE
Заголовок открываемого материала
Access to the chat has been blocked for violating the rules . You will be able to participate again through:∞. If you do not agree with the blocking, please use the feedback form
The discussion is closed. You can participate in the discussion within 24 hours after the publication of the article.
To participate in the discussion
log in or register
loader
Chats
Заголовок открываемого материала
Worldwide
InternationalEnglishEnglishMundoEspañolSpanish
Europe
DeutschlandDeutschGermanFranceFrançaisFrenchΕλλάδαΕλληνικάGreekItaliaItalianoItalianČeská republikaČeštinaCzechPolskaPolskiPolishСрбиjаСрпскиSerbianLatvijaLatviešuLatvianLietuvaLietuviųLithuanianMoldovaMoldoveneascăMoldavianБеларусьБеларускiBelarusian
Transcaucasia
ԱրմենիաՀայերենArmenianАҧсныАҧсышәалаAbkhazХуссар ИрыстонИронауОssetianსაქართველოქართულიGeorgianAzərbaycanАzərbaycancaAzerbaijani
Middle East
Sputnik عربيArabicArabicTürkiyeTürkçeTurkishSputnik ایرانPersianPersianSputnik افغانستانDariDari
Central Asia
ҚазақстанҚазақ тіліKazakhКыргызстанКыргызчаKyrgyzOʻzbekistonЎзбекчаUzbekТоҷикистонТоҷикӣTajik
East & Southeast Asia
Việt NamTiếng ViệtVietnamese日本日本語Japanese俄罗斯卫星通讯社中文（简体）Chinese (simplified)俄罗斯卫星通讯社中文（繁体）Chinese (traditional)
South America
BrasilPortuguêsPortuguese
NewsfeedBreaking
19:56 GMTSetback for QUAD? Survey Suggests Almost All American Firms are Bullish on China
19:24 GMTTexas Governor Greg Abbott Signs ‘Anti-Smuggling’ Law into Effect
18:58 GMTDrums for Everyone: 'RAV Labs' from Perm Creates Global Community by Inventing Musical Instrument
18:40 GMTWhite House Set to Prepare Federal Agencies for Possible Gov't Shutdown
18:35 GMTAcid Rains to Possibly Hit France After La Palma Volcano Eruption
18:25 GMTIndian Firm Uses Spacesuit Tech to Develop World's Lightest Radiation Gear for Surgeons
18:08 GMTPowerful 5.6-Magnitude Earthquake Hits Mexican Coast
18:07 GMTUS House Passes Legislation Funding Israeli Iron Dome Defense System
18:07 GMTWhy Democrats and GOP Stick to Their Guns in Debt Ceiling Battle as Biden Remains Mum
17:50 GMTWhite House Says Biden Administration Never Planned to Send Haitian Migrants to Guantanamo
17:41 GMTGabby Petito Case Ignites Debate on Disparity of Media Coverage for Missing Coloured People
17:28 GMTFormer Czech President Klaus Hospitalised Twice in Two Weeks
16:59 GMTTucker Carlson Slams Biden Video From 2015, Cries 'Great Replacement' Theory Amid New Migrant Influx
16:59 GMTForgotten 'Ghost Town' Discovered in Utah After Water Reservoir Recedes, Report Says
16:55 GMTFrench Official Hopes Russia Will Impose Moratorium on Champagne Labelling Law
16:53 GMTTaliban Plans to Appoint Ambassadors to Countries Recognising New Interim Government
16:37 GMTErdogan Says Work With Biden Has Seen a 'Not Very Good Start'
16:30 GMTUnexpected Bath Time: Frightened Cat Jumps Right Into Swimming Pool
16:19 GMTChina Reportedly Mulls Bailing Out Evergrande Developer As Default, Economic Shock Loom
16:17 GMTUS House Speaker Pelosi Vows to Pass Temporary Funding Bill to Keep Government Open