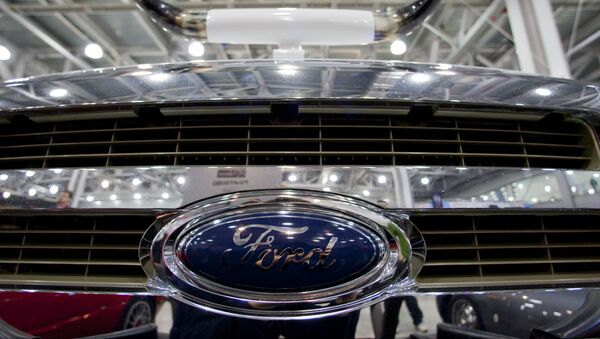 According to a company statement cited by Reuters, the US-based auto manufacturing giant did not elaborate on Ford's decision to not attend the Future Investment Initiative conference in Riyadh, and did not comment on whether concerns about the disappearance of Jamal Khashoggi were a factor.

A Look Into US-Saudi Defense Deals at Stake as Spat Over Khashoggi Deepens
A Future Investment Initiative forum spokesperson said Saturday that the event would be held on schedule despite the refusal of a number of guests to participate, amid the disappearance of prominent Saudi journalist Jamal Khashoggi.

On Friday, media reports noted that Future Investment Initiative's high-profile media sponsors, including the Financial Times, CNBC, The New York Times, CNN and Bloomberg, had withdrawn from the event in the wake of Khashoggi's alleged murder.

British Tycoon Richard Branson said Thursday that his company Virgin Galactic put on hold negotiations about investments in two of his space companies until a probe into the missing journalist has been completed.

US Senators Urge Trump to Explore Sanctions Against Saudi Arabia Over Khashoggi
Khashoggi, a former Riyadh insider who was working for The Washington Post newspaper and has been a vocal critic of the Saudi monarchy, went missing in Turkey on October 2. According to his fiancee, Khashoggi entered the Saudi consulate in the Turkish city of Istanbul and never came out.

The Washington Post reported on Friday that Turkish authorities shared audio and video recordings with United States intelligence suggesting that the journalist had been murdered in the Saudi consulate. Riyadh denied any involvement in the disappearance of Khashoggi, claiming that the journalist left the consulate of his own accord.

The United Kingdom, Germany and France have called for a 'credible' probe to establish the truth about what happened to the missing journalist. US President Donald Trump threatened on Saturday to "punish" Riyadh if it were proven to be behind the suspected killing.