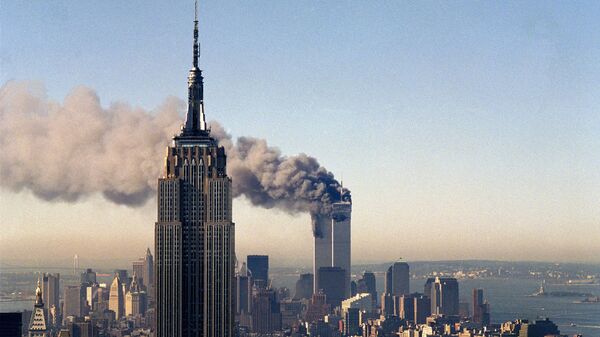 © AP Photo / Marty Lederhandler
Subscribe
Leslie Robertson, the lead structural engineer of the World Trade Center's infamous Twin Towers, was haunted by their collapse and the pain that followed 9/11.

Leslie Robertson, 90, the man who oversaw the construction of the Twin Towers that collapsed during the terrorist attack on September 11, 2001, has stepped back into the public spotlight 17 years after devastating terrorist attacks plunged the whole nation into grief.

Ahead of the premiere of Leaning Out, a documentary about his engineering career, scheduled to premiere on Tuesday, Robertson told the New York Post that the Twin Towers "were designed [to withstand a] 707," the largest jet airliner that existed in the 1970s, when the World Trade Center project debuted.

Unfortunately, a force majeure that then 34-year-old Leslie failed to foresee was two Boeing 767 jets fully loaded with fuel that caused a massive fire to the towers, weakening their structure.

A fellow architect says in the film that Robertson "had to defend himself" from attacks and criticism from other engineers, architects, and clients. But probably the most traumatic experience was meeting people who lost their close ones in the attack.

"I got 1,000 letters from people, writing in support of my work," Robertson said. "But I also had people come to my office who had lost someone there. They wanted to talk." Robertson even went to therapy alongside grieving survivors.

Although his firm oversaw the construction a skyscraper known as 4 World Trade Center, he avoids that area. "I find it very difficult to go there," he admitted. "I did as little as possible [on 4 WTC]."

‘Who Is Going to Want This Guy?'

The ill-fated engineer was questioned as part of the FEMA's 9/11 investigation and his drawings examined. He was found innocent despite reasonable fears that the Twin Towers' collapse would put an end to his career. "I thought I was really through, through, through, through — forget it!" he recalls in the movie. "Who is going to want this guy whose building got taken down by a simple airplane?"

"I was probably the only person on the planet who could really say that the buildings were safe… the only one who could say, ‘Hey, take the subway, and go back to work in that building,'" Robertson lamented. "Following 9/11, I didn't appear on television for months. I had nothing that I could say to people to make them feel better."

However, his career apparently continues to flourish: since 9/11 he has garnered a number of prestigious awards and accolades from professional organizations, such as the UK-based Institution of Structural Engineers, the American Society of Civil Engineers, and the American Association of Engineering Societies. He is now working on PNB 118, a 644-meter tall skyscraper in Kuala Lumpur, Malaysia.

Why Did the 9/11 Attacks Happen? Filling in the Blanks

On September 11, 2001, al-Qaeda suicide bombers hijacked four passenger planes in the United States, sending two to New York's World Trade Center towers and the other two to the Pentagon and, presumably, the White House or the Capitol.

All the airplanes, aside from the final one reached their targets. The fourth plane crashed in a field near the town of Shanksville, Pennsylvania. The September 11 attacks were responsible for 2,977 total casualties, including 343 firefighters, 60 policemen, and foreigners from 92 countries.

Among the nineteen terrorists who died in the attacks were 15 citizens of Saudi Arabia as well as four others, from the UAE, Egypt and Lebanon.