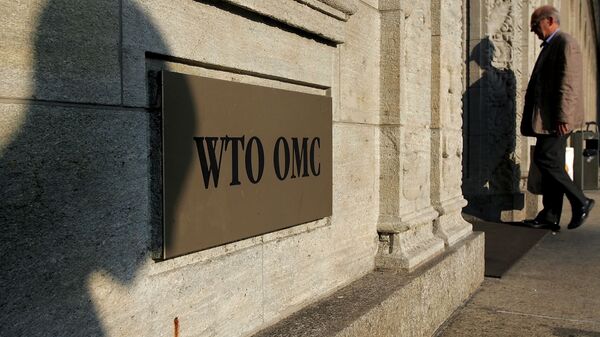 Trump has long claimed that the World Trade Organization (WTO), the intergovernmental body that regulates international trade, favors China, since the country joined the organization in 2001.

"If they don't shape up, I would withdraw from the WTO," Trump said in an August 30 interview with Bloomberg. It's not clear what topic under discussion led Trump to make the remark.

This isn't the first time that Trump has slammed the Geneva-based organization.

"We're demanding fairness with the World Trade Organization. It's been a disaster for the United States, and we want fairness. We lose court cases. We always had a minority of judges; they gave us fewer judges than other countries had," Trump said in July.

"And we'd lose cases — nobody knew why. I said 'I know why: because you don't have judges from this country.' You have a minority. Three to two, with three being on the other side," he said.

In January, US Trade Representative Robert Lighthizer claimed that the WTO made a "mistake" by permitting the WTO allow China to join the organization.

According to WTO director-general Roberto Azevêdo, Trump's criticism of the organization has prompted other members, including the European Union and Japan, to call for change.

"This guy comes along, and he begins to shake the tree pretty hard. So let's make sure that some fruits fall. Let's make sure also that you don't kill the tree by shaking it too hard," Azevêdo said, cited by Bloomberg.

In September, Canada and the EU published separate blueprints aiming to improve three of the pillars of the WTO: negotiation, dispute settlement and monitoring. In addition, the papers call for an update to global trading rules, stating that the methods have remained unchanged since the organization was established in the 1990s.

Improvement proposals also suggested "plurilateral," sector-specific negotiations that eliminate veto power often used by small WTO members. The EU and Japan are also joining the US to stand up against what they consider to be China's theft of intellectual property, Beijing's deep industrial subsidies and its many state-owned enterprises.

In addition, there is a push among WTO members to remove China from the "developing" economy category, which unfairly allows Beijing additional time to comply with certain regulations.

The US-Chinese trade war broke out in July after Trump imposed tariffs on some Chinese imports as a means to balance a US-Chinese $500-billion trade deficit. Since that time, the two sides have exchanged several rounds of import duties on each other.