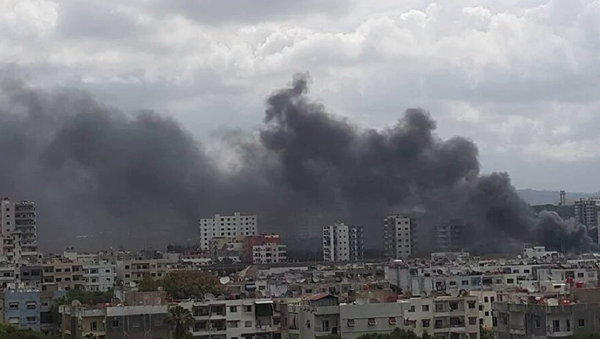 © Photo : Twitter/ Aldin Abazović
Subscribe
International
India
Africa
MOSCOW (Sputnik) - The Russian side of the Russian-Turkish commission monitoring the implementation of the Syrian ceasefire has registered nine truce breaches over the past 24 hours, while the Turkish side has not recorded any ceasefire violations, the Russian Defense Ministry said Sunday.

"Over the last 24 hours, the Russian party of the Russia-Turkey Commission on violations of the Joint Agreement has registered 9 cases of firing in the provinces of Latakia (3) and Aleppo (6). The Turkish side has registered no cases of ceasefire violation," the ministry's Center for Syrian Reconciliation said in its daily bulletin.

"Over the past 24 hours, insurgents attacked Jedra Alfira, Jubb al-Mgara and Jurin in Latakia province, Tadef, Aleppo prvince, Shuhba district and research centre (three times) in Aleppo city. Attack of government positions near Jurin, Latakia province was also recorded, as a result of which two soldiers of the armed forces of the SAR were killed and two were wounded," Lt. Gen. Vladimir Savchenko, head of the center, said.

Meanwhile, the center has held two humanitarian operations over the past 24 hours, delivering 900 food sets totaling nearly four tonnes to civilians in Aleppo and Deir ez-Zor.

The number of areas, which signed reconciliation agreements, has remained the same and amounts to 2,518, the bulletin said. The number of armed formations claiming that they observe the ceasefire has not changed either, standing at 234.

Russia, Turkey and Iran are the guarantors of the ceasefire in Syria, while Moscow has also been assisting Damascus by supporting the government forces' fight against terrorist groups and providing humanitarian aid to civilians.