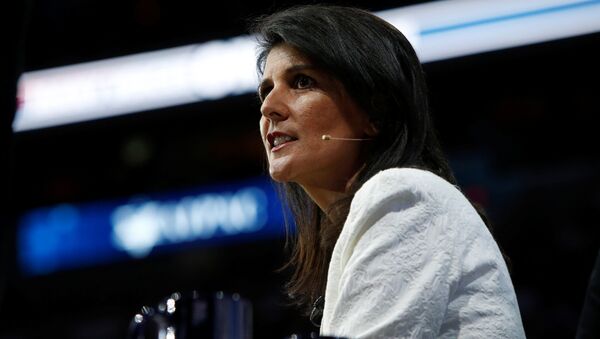 © REUTERS / Joshua Roberts
Subscribe
International
India
Africa
One of only a few current administration officials who has publicly contradicted the president without repercussion, United States Ambassador to the United Nations Nikki Haley will walk away from Trump on her own terms.

Last week, US President Donald Trump announced that Haley would leave her post at the end of 2018. The news website Axios, which first broke the story, said the decision was Haley's alone and that the White House foreign policy team was "shocked" when she offered her resignation on October 3.

'If Bolton Could Nuke Russia, He Would, But He Works for Trump' - Journo

The US president expressed hope that Haley would come back to his administration in a different role, while Haley thanked the president for allowing her the "honor of a lifetime" to serve as UN ambassador.

"We're all happy for you in one way, but we hate to lose [you]. Hopefully, you'll be coming back at some point. Maybe a different capacity. You can have your pick," Trump said.

Two people familiar with Haley's resignation recently told Politico that she did not want her resignation to appear to be a response to a potential Republican loss in November's midterm elections, or one prompted by any other negative event such as the results of special counsel Robert Mueller's investigation into Russian interference in the 2016 US presidential election.

"Right now is a good news time for the administration coming off of the Kavanaugh wins, coming off of the trade wins. If you know that you're intending to leave at the end of the year, it's a good time to leave when things are up," a person familiar with the matter told Politico.

Haley is known for closely controlling her narrative, and the subject of her resignation is another example.

Previously, National Economic Council Director Larry Kudlow said that Haley was "momentarily confused" after she announced on CBS' "Face the Nation" that US Treasury Secretary Steven Mnuchin would announce new sanctions on Russia.

"With all due respect, I don't get confused," Haley said in a widely circulated statement that provoked a public apology from Kudlow.

In addition, Haley — has referred to the Russian meddling in the 2017 election as an "act of warfare" — is one of the few administration officials who has contradicted the president without being dismissed from his administration.

In addition, she has stated that the women who have accused Trump of sexual misconduct should have a hearing.

"They should be heard, and they should be dealt with," she said at the time. "And I think any woman who has felt violated or felt mistreated in any way, they have every right to speak up."

On Tuesday, Haley stated that she would not run for the White House in 2020, but would campaign for Trump. However, according to some, Haley may still be setting herself up for a run at the presidency in 2024.

"The Nikki Haley 2020 GOP primary challenge to Trump is going to be lit," Bill Kristol, the editor-at-large of the Weekly Standard, recently tweeted.

In her resignation letter, Haley — who was born Nimrata Randhawa in South Carolina, to a Sikh family — clarified that she intends to keep herself in the public eye.

"I expect to continue to speak out from time to time on important public policy matters," she said, cited by CNBC.

Nikki Haley a lifelong Republican, has served as the 29th United States ambassador to the United Nations since 2017. Before being appointed to the office, she served as governor of South Carolina.