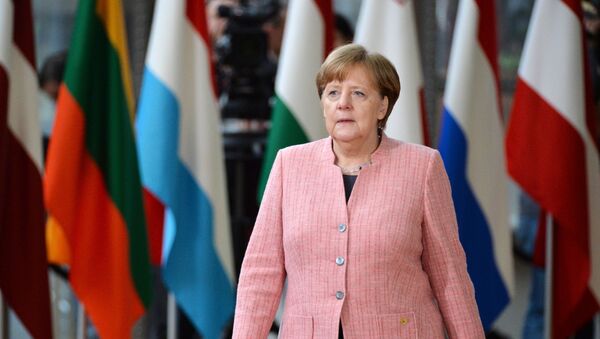 © Sputnik / Alexey Vitvitsky
Subscribe
International
India
Africa
BRUSSELS (Sputnik) - The polls have closed in Bavaria, where voters were electing a new state parliament, and the first evaluations reflect the opinion polls of the last few weeks that predicted the loss of the absolute majority by the governing Christian Social Union.

So far, the CSU has polled 35.5 percent, the Social Democrats suffered a blow with a meager 10 percent of the vote, the Green more than doubled their results, polling around 19 percent, the Free Voters fared better than expected, winning 11.5 percent, the anti-migrant AfD got an expected 11 percent, the liberal FDP secured 5 percent, while the far-left Die Linke fell through with 3.5 percent.

'Islam Belongs to Merkel, But She Doesn’t Belong to Germany' – AfD MP
The mild Indian summer enticed citizens to vote in Bavaria this Sunday. It is under a bright sun that voters went to the polls to elect deputies to the state parliament, Landtag. But the regional election creates a real storm in the political landscape of the second-richest state in Germany, but also in Berlin.

Since the end of the Second World War, the traditional ally of the conservative Christian Democratic Union have always obtained an absolute majority, except in 1966. This undivided reign should end tonight.

Since April, the CSU had tumbled by 11 percent in the polls. The Green have, at the same time, going from 11 percent to 19 percent of favorable opinions. An impressive leap forward for a party that received only 8.6 percent of the vote five years ago.

Ecologists will thus become the second-largest political force in Bavaria, ahead of the far-right Alternative for Germany. The Social Democratic Party (SPD) has meanwhile lost a little more than half of their voters since the last regional elections.

"The slap that the CSU received is brutal for a party that was used to reign supreme," Henrik Uterwedde, deputy director of the Franco-German Institute Ludwigsburg (BadeWurttenberg), told Sputnik.

"The reasons for this fall are numerous. The rivalry between Horst Seehofer, the president of the CSU, also federal minister of the interior, and his successor as minister-president, Markus Soeder, has also wreaked havoc in the party," he added.

Merkel's Ally CSU Suffers Losses in Bavaria Election, Loses Majority - Exit Poll
The Bavarian governor put a damper to his anti-migrant speeches but too late, Uterwedde noted. He first lost the most radical CSU voters who went over to the AfD, and then the "centrists" – the women and young voters – who left for the Green.

The CSU will now have to ally with at least two minority parties or change horse and form a coalition with the Green, with whom it would have a comfortable absolute majority.

In the televised debate on ZDF did not rule out an alliance. Henrik Uterwedde said such cohabitation already exists in the state of Hesse and it works despite a greater polarization between the right and the left than in Bavaria.

"The Bavarian election will trigger an earthquake in Berlin," Die Linke leader in the Bundestag, Sahra Wagenknecht, has predicted.

Chancellor Merkel is already struggling for control. Members of her party disavowed her on September 25 when they elected Ralph Brinkhaus as a new group leader in the federal parliament, while she had openly supported Volker Kauder.