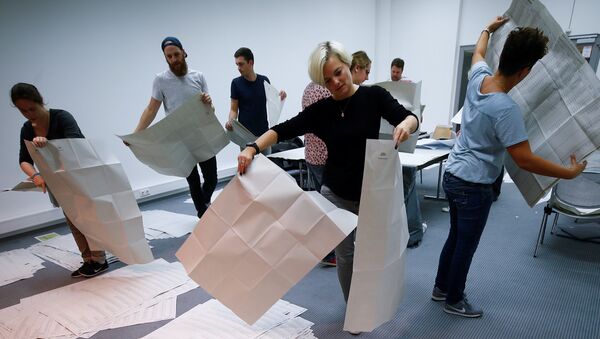 © REUTERS / Wolfgang Rattay
Subscribe
International
India
Africa
MOSCOW (Sputnik) - With all ballots counted, Bavarian conservatives are leading in the election to the regional parliament with 37.2 percent of the vote, results by the state electoral authority show.

There Were No Stabbing Incidents in Germany Before Merkel's 'Open Border'– AfD
Bavarian Minister President Markus Soeder has said he accepted with humility his conservative party’s apparent loss of majority in the state parliament.

Europe Facing 'Greatest Test in History' Over Economy, Migration, Terrorism
In May, the Bavarian government passed a controversial bill expanding the powers of police in the wake of an influx of migrants, including giving cops the right to use online surveillance, facial recognition, postal seizures, drones, body cameras and preventative genetic DNA analyses. The move sparked mass protests in the Bavarian capital of Munich last spring, against what are considered by some to be increasing right-wing policies of the federal state government.