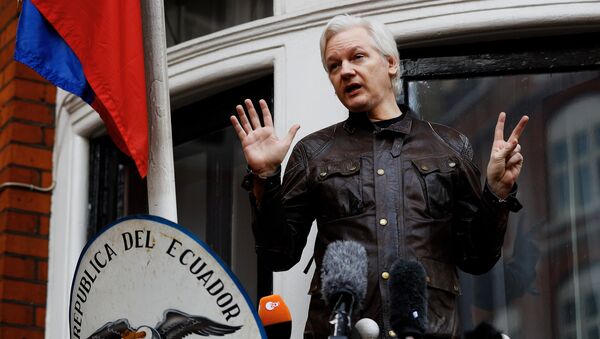 © REUTERS / Peter Nichollspe
Subscribe
International
India
Africa
The Wikileaks founder has been cut off from internet and phone communication since March 2018.

“Ecuador has told WikiLeaks publisher Julian Assange that it will remove the isolation regime imposed on him following meetings between two senior UN officials and Ecuador’s President Lenin Moreno on Friday," a Wikileaks statement noted.

Science & Tech
WikiLeaks Publishes Alleged Secret Files on Amazon's Data Centers
According to Wikileaks, the decision to restore Assange's communication was made after UN High Commissioner for Refugees Filippo Grandi and UN Special Rapporteur for Freedom of Expression David Kaye met with the president of Ecuador, Lenin Moreno.

Assange's communications were cut in March, as Ecuadorian authorities said that the publisher violated an agreement not to issue messages that might interfere with other nation's affairs.

“It is positive that through UN intervention Ecuador has partly ended the isolation of Mr Assange although it is of grave concern that his freedom to express his opinions is still limited," Kristinn Hrafnsson, WikiLeaks editor-in-chief, said.

The website denied Assange made any kind of deal with Ecuador, adding that Assange's lawyers are preparing to take legal action against what they perceive as a violation of freedom of expression.

The Wikileaks statement noted that Assange remains isolated within the embassy due to fears of being arrested and extradited to the United States, where he is wanted for questioning over leaks of sensitive information and could be charged with treason and spying.

'Free Speech': Trump Campaign Defends WikiLeaks' Release of Hacked DNC Emails
The statement says the UK government must abide by the UN ruling and guarantee that Assange can exit the embassy without the threat of extradition.

"Concern over Mr Assange’s situation has also been raised by other UN bodies, as well as Human Rights Watch [who was refused access to him], Amnesty International, the Inter-American Court on Human Rights, Ecuador’s Permanent Human Rights Commission, and public protests," the statement added.

"The UN has already declared Mr Assange a victim of arbitrary detention. This unacceptable situation must end," it observed.