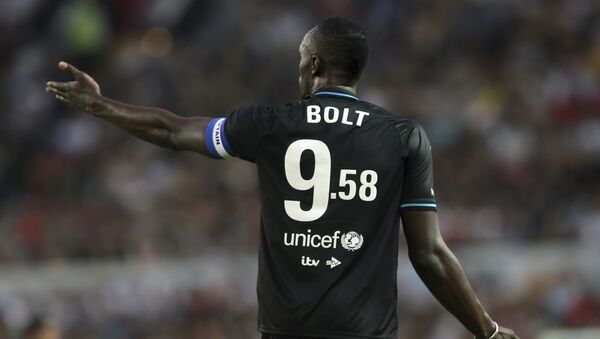 In Friday's friendly game, Central Coast Mariners head coach Mike Mulvey handed Bolt his first start, playing the running legend as a striker. However, local sports anchors said that Bolt, 32, prior to his goals on the score sheet after 54 minutes, looked a bit lost for most of the match with a noticeable lack of ball control, possessions failures and several missed one-on-one chances with the rival goalkeeper.

Nevertheless, the Jamaican superstar athlete was seen working hard to perform on a proper gaming level alongside his teammates, with some significant skill improvements since his August debut as a pro football player. Bolt went on to score a second goal in the 68th minute, after a series of comedy errors between a defender and the goalkeeper.

Twitter on Fire as Retired Sprint Star Bolt Reveals Contract With Football Club
After the game, however, Central Coast Mariners CEO Shaun Mielekamp told ESPN that it was too early to tell if Bolt's latest performance would be enough to secure him a full player contract.

"We have genuinely treated Usain like we would have any other triallist. He's been training hard with us and tonight he showed weaknesses but he also showed his strengths and got two goals, so all credit to him. Whether it sways the outcome, it's too early to tell," Mielekam said, cited by ESPN.

The eight-time Olympic champion told reporters after the game that he was pleased with his improvement but humbly refused to label himself a professional football player, yet.

"Until I sign, I am not saying that," Bolt said after the match. "When we will sit down with the club, we will sit down and discuss that if we want to move forward and what I need to do and how we can do it."

"I'm taking it one step at a time," he said, adding, "I'm here to prove to the world that I can be a footballer and I can push myself and see how far I can go."