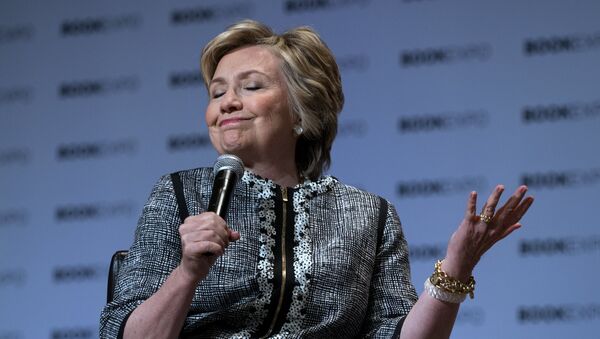 © AP Photo / Craig Ruttle
Subscribe
International
India
Africa
After it had become known that the former secretary of state and two-time presidential candidate had her security clearance withdrawn “at her request” this August, social media users took this chance to blast Hillary Clinton and predict her future in prison.

Hillary Clinton’s security clearance was revoked on August 30, 2018, at her own request. The fact became known on October 12, when a letter Charles Faulkner of the US State Department sent to US Senate Judiciary Committee Chair Chuck Grassley was made public.

Besides Clinton, five other people, including Hillary's former chief of staff Cheryl Mills, parted with their access to classified information on September 20. They had been granted "researcher" status and security clearances through a request made by Secretary Clinton.

This letter was reportedly issued as a part of the State Department's investigation into Clinton's mishandling of classified information. Clinton was accused of negligence for having set up a private email server during her tenure as secretary of state under Obama.

The recent revelations have prompted a vigorous reaction on Twitter, as many netizens have questioned Clinton’s motives behind the revoke request or just taken the opportunity to roast the former top official.

Some pointed out that the timing for the voluntary withdrawal looks suspicious.

At her request is the same as resigning because you are about to be fired!

Probably was about to be taken away, so she had to make it look as if her choice.

Even she knows she can’t be trusted 😜

​​The request itself seemed “fishy” to other users.

There were those, who implied that Hillary Clinton was up to something.

She is up to something! Just wait and see!

​Many just used the news as an inspiration for memes and jokes. The prison gags prevailed.

READ MORE: Trump: Former FBI Head Comey Did Clinton a Favor Because ‘She Should Be in Jail’

Hillary Clinton losing her security clearance is the greatest thing to happen in 2018. What’s next? #Qanon pic.twitter.com/FG4p1ClUEn

She is about to see how orange looks on her. pic.twitter.com/8zBz7Hruie

As another wise Trumper just stated:
"Good. Now arrest her at our request."

​One couldn’t but mention Kanye West, known as an eager advocate of Trump.