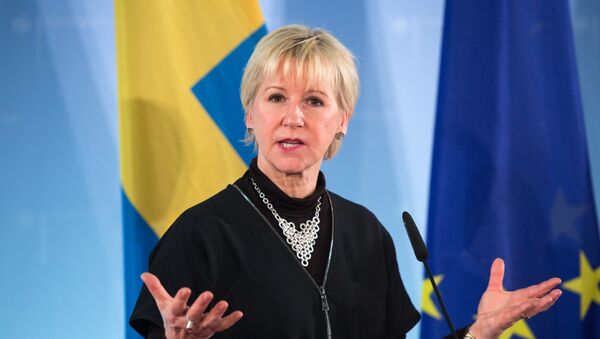 Efforts to choose a successor to the President of the European Commission, Jean-Claude Juncker, are already underway, and Sweden's feminist Foreign Minister Margot Wallström is seen as a welcome candidate, according to the tabloid daily Aftonbladet, a perspective many Swedes aren't too comfortable with.

Social Democrat Foreign Minister Margot Wallström, who is credited with pioneering a "feminist foreign policy," is seen as one of the possible candidates to become the next president of the European Commission, as its current leader Jean-Claude Juncker is expected to step down next year, Aftonbladet reported, citing sources in the Social Democrat parliamentary group and individual countries.

"Wallström is seen as a strong successor to Juncker," a Social Democrat source told Aftonbladet.

The next EU election will happen in May 2019. Prior to this, party coalitions will name their candidates. According to Aftonbladet's sources, Wallström is one of the top candidates for the Social Democratic group in the EU. Aftonbladet has suggested that the liberal factions of the European Parliament are concerned over the rise of "deeply conservative and populist forces" and are likely to back Wallström as a counterweight.

"There are a series of talks going on around Margot Wallström and her circle. Many are investigating her interest in becoming a candidate," the Social Democrat source said. "She is seen as a strong name especially among German Social Democrats," the source added.

The fact that Wallström has long-standing EU experience, including a total of ten years as an EU commissioner and the European Commission vice president, is seen as a welcome merit together with her previous work within the UN as well as her career as a minister and diplomat. According to Aftonbladet, Sweden is losing an important ally with the exit of the UK from the EU, which is why the post of the EU president is desired due to the leverage it grants.

During her tenure as Sweden's Foreign Minister, Margot Wallström is best-known for her feminist stance, but also a number of controversies. In 2014, Sweden became the first EU nation to recognize the state of Palestine, which caused a backlash from Israel and a dramatic souring of Swedish-Israeli relations. In 2015, Wallström ignited a row with Saudi Arabia by running down its human rights record and calling it a "medieval dictatorship," that caused a backlash across the Arab world. In 2016, she caused yet another international row by accusing Turkey of allowing child sex, to which Ankara answered with a reprimand and urged Sweden to "check its facts."

Not all Swedes were jubilant over the idea of Wallström presiding over the European Commission.

"And I thought that Juncker was bad enough. *hic*," former Sweden Democrats member Erik Almqvist tweeted, referring to speculations that Juncker was tipsy at the recent NATO summit, where he was seen staggering around and helped by fellow EU leaders.

​"Isn't she at least sober during working hours? That's a clear merit for the job," another user chipped in sarcastically.

"Wallström as the top EU boss? Then they have completely lost it. She lacks any form of diplomatic talent. Affronted 54 Arab states, persona non Grata in Israel are just some of her merits. Also, loves the terrorists in Hamas who get extra billions every now and then," Göte Larsson tweeted.

Margot Wallström's press officer Pezhman Fivrin said it was "nice" that his boss is present in the discussions about the EU leadership, but stressed that Wallström was currently fully focused on her duties as foreign minister.