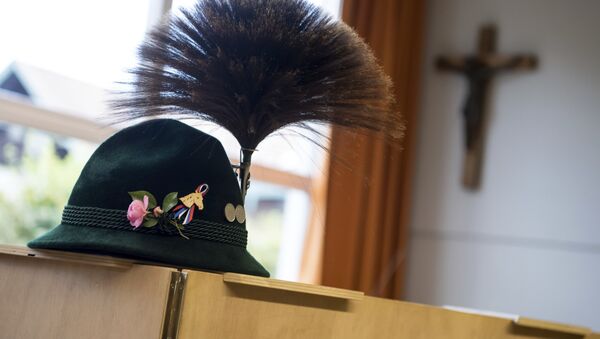 BRUSSELS (Sputnik) - The upcoming Bavarian state election threatens to deliver a powerful blow to the dominance of the region’s ruling CSU in the light of its recent row with the sister CDU and the Bavarian party’s ultimate failure to stand up for its tough stance on migration.

Christian Social Union (CSU) has been ruling the region with no less than 40 percent of the vote since 1946, which makes the current electoral season an important landmark for the whole region and the ruling CDU-CSU coalition and also entail far-reaching implications for the unity of the ruling coalition in Berlin.

The fight around the election has started long before, and an April government decree requiring all regional public buildings to display a crucifix from June 1 was seized by the opposition as an opportunity to accuse CSU of an attempt to thereby win back votes amid concerns over the rise of the far-right Alternative for Germany (AfD) party.

Bavarian Minister President Markus Soeder himself argued that "it is not a religious, but a cultural sign."

During the campaign, Soeder has also attempted to distance himself from Chancellor Angela Merkel. He even reportedly declared that "the sole Chancellor who will campaign with me is Sebastian Kurz, the young chancellor of Austria!"

In a bid to keep his seat as the Bavarian leader, he also blamed the party’s poor poll numbers on "the crosswinds from Berlin."

Merkel Reaches Deal With CSU on Migration in Germany 'After Very Intense' Talks
Opinion polls do not look good for the CSU. The party is badly hurt by its failure to stand up for its tough stance on migration amid the immigration wave that hit this German region first, and the ensuing squabbles between Merkel and the party leader and federal interior minister, Horst Seehofer, over the issue.

Currently, the CSU has 101 seats in the regional parliament, against 79 occupied by all other opposition parties together, but the latest polls show a crushing upset: the CSU is only at 33 percent, losing nearly 20 percent, while the newly arrived anti-immigrant AfD could reach 14 percent and overtake the Social Democratic Party of Germany (SPD) as the third party.

Social Democrats, meanwhile, also seem to be in decline, with 11 percent of support, while the Greens shoot up to 18 percent becoming the second party.

According to Katrin Ebner-Steiner, an AfD candidate for Bavaria, the CSU lost any touch with voters and as a result, its support base is flocking to her party.

"The CSU is totally out of touch with the citizens of Bavaria. And a lot of the people from the base of the CSU think like us, in AfD, so many former CSU voters flock to AfD. One of our slogans is: ‘the Afd keeps the promises that the CSU has made,’ implying what everybody can realize: Horst Seehofer was very angry, very vocal in 2015 and 2016, against the open borders policy of Frau Merkel, but neither he nor his party did anything to stop the invasion. A lot of talk but no action," Ebner-Steiner told Sputnik.

German CDU, CSU Likely to Resolve Migration Row in Fear of Early Elections - AfD
So, the AfD party has been polling between 11 percent and 14 percent, yet it usually performs better at the ballot box than pollsters predict. One cannot fall back on prior results since the party runs for the first time in Bavaria.

Another conservative party, the FW (Free Voters) party, meanwhile has a strong support in Bavaria, which makes the state a difficult territory for AfD to gain ground on. The FW stands at some 10 percent, according to the polls.

AfD, nevertheless, is almost certain to join the state legislature for the first time, further boosting the current momentum.

AfD federal spokesman Joerg Meuthen predicts "a resounding defeat" of the CSU, citing its alleged insufficiently firm stances on many issues and recent quarrels with the sister party.

"Seehofer is not making many appearances at election rallies; He is not anymore a mobilizing figure. His total loss of credibility in Berlin as Minister of Interior and the squabbles with Chancellor Merkel are two of the main reasons why the CSU will suffer a resounding defeat in the election on Sunday. People want firmness, action and results," Meuthen told Sputnik.

The Hour of the Greens in Bavaria?

CSU Do Not Plan to Break With Merkel's CDU Amid Migration Row - Bavarian CSU MP
The CSU, however, risks alienating voters not only to the right but also to the left. The Greens, who were never strong in Bavaria before, have shot up in polls to 18 percent and more, effectively becoming the second party in the region.

For many observers, the Green party is the new left, the "volkspartei" that SPD once was.

During the campaign, the CSU and the Greens have been very careful not to criticize each other too much, announcing a possible coalition to run the land.

Another party, the hard left Die Linke, is polled at some five percent, despite the recent "new" approach by a faction of the Left, led by Sahra Wagenknecht, the Die Linke leader in the Bundestag.

'Delusions of Grandeur:' Twitter Mocks Bavaria Head's Self-Focused Space Program
She has voiced her opposition to the immigration policy of the Merkel government, accusing it of potentially taking away the jobs of low-qualified Germans.

Ferdinand Kramer, a professor of political sciences at Ludwig-Maximilian university in Munich, noted Die Linke’s rising potential, stressing however that the party was "too much to the left" for the Bavarian electorate.

"Die Linke is too much to the left of the political spectrum for the Bavarian electorate. Socialism was never very strong in catholic Bavaria and the positioning of Mrs Wagenknecht against immigration is too recent to have an impact on the electorate. The Greens will certainly benefit from the decline of the SPD and of the increased prominence of environmental issues in the political life, such as climate change or the push for renewable energies. Green could be called the new Red," Kramer told Sputnik.

For Michael Weigl, a professor of political sciences at the University of Passau in Bavaria, "there is no question that the main theme of the campaign has been immigration."

Yet, he noted that Bavaria is not much different from other states, being also concerned about affordable housing and childcare.

"Bavaria is not a rich, catholic exception in Germany anymore. We see the same trends in elections there as in the rest of Germany. The most important element for comments, from Sunday’s election will be the analysis of what issues matter most to voters. Bavarians, like the rest of Germany, are not only worried about the large number of immigrants; there is a series of other pressing matters, from access to affordable housing for the young families, amid exploding rents, and social housing to child care," the expert clarified.

While the CSU risks falling short of an absolute majority, the question is what coalition options are possible after Sunday’s election.

An unsurprising alliance between CSU and the Greens is the option that would be likely favored in Berlin, where Merkel wants to veer to the center-left, away from the angry right wing of her own party. Merkel’s popularity is plummeting, Norbert Roettgen, an CDU lawmaker, asked earlier in October that the chancellor’s term in office be limited.

Election in Hesse as Another Test for CDU

New Immigration Law Will Increase Growth Potential of German Economy - Minister
The state of Hesse, the home of the Frankfurt financial center, is also on its way to go to the polls on October 28, with the situation not much different from one of Bavaria. There too, the CDU may face a cold shoulder.

Weigl suggested that the Greens on the left and AfD on the right would likely build on the 2016 local election results and outnumber the CDU and the SPD.

"The writing is already on the wall. On March 7, 2016, the local elections in Hesse had given a stunning result for AfD, the new party only born three years earlier, in 2013. The right-wing list obtained 13.2 percent at the local elections, while the CDU and the SPD only got 28 percent each. In normal times, the CDU was always above 38 percent, so it was a loss of 10 percent. So, in Hesse too, the expectations are that the two winning parties will be the Greens on the left and AfD on the right," Weigl told Sputnik.

The present coalition that has ruled the state of Hesse since January 2014 is "Black – Green," CDU and the Greens, with a short majority of 60 seats (they need 56).

German Population Unhappy with Policy of Letting Migrants in 2015 - Professor
The Greens go from 11.1 percent to 18 percent, and AfD from 4.1 percent to 13 percent. Die Linke and the Liberals are both above the 5 percent threshold.

In Hesse too, the CDU will likely have to find a coalition partner. Will the results be sufficient to continue with the Greens? The polls indicate that the Greens’ progression, does not fully compensate the CDU losses. They could fall short of the majority. The only other "simple" option is an alliance identical to the ruling coalition in Berlin: CDU and SPD.

End of the Era?

In Bavaria, rather than blame Minister President Soeder for the bad results to come, the CSU will likely blame its leader Seehofer. But Bavarian attempts to oust him could ricochet in Berlin with a federal government crisis.

Exactly a year ago, on September 24, 2017, in the German federal elections, the CDU-CSU bloc lost 8.6 percent of the votes and only secured 41.5 percent. The CDU is still the largest party in Germany, but the decline of the CDU-CSU and of the coalition partner SPD has weakened the federal government.

READ MORE: The Right on the Rise: EU Liberal Elite is Cooking Its Own Goose — Historian

In parliament, the sessions look much more like any other parliament in Europe than before. In the old days, debates were polite. This is finished. Opposition parties on the left and the right are much more powerful, have many more members in parliament and present a greater challenge to the ruling coalition.

The upcoming state elections in Bavaria and Hesse may become another blow.

The approval rating of German Chancellor Angela Merkel's Bavarian ally, the Christian Social Union (CSU), edged lower during a week ahead of the election to the Bavarian parliament on Sunday, a poll showed.

'We Have an Imported Anti-Semitism in Germany' - AfD Party Member
According to a survey conducted by the research group Wahlen for the ZDF broadcaster, the CSU rating fell by 1 percentage point from 35 percent last week when it hit a record low.

The Greens were ranked second in the poll as their rating increased by 1 percentage point to 19 percent.

Similarly, the support for the Social Democratic Party (SPD) grew by 1 percentage point from last week to 12 percent, the survey showed.

Meanwhile, 10 percent would vote for the Alternative for Germany (AfD) party, according to the poll.

A total of 1,075 adults participated in the survey which was conducted on October 10-11.