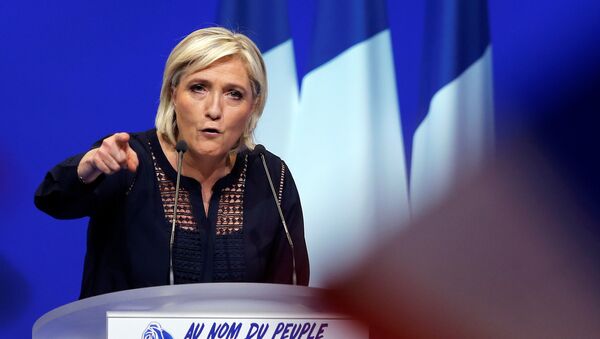 In July, judicial investigators in Paris reportedly decided to withhold 2 million euros of state subsidies that the National Rally (formerly known as National Front) was supposed to receive. They suspected that the party had created a hidden system for plundering European funds.

A French court has tightened charges against the leader of the National Rally party, Marine Le Pen, the radio station Europe 1 reported Friday.

"Marine Le Pen appeared on Friday before the investigating judges of the Paris Prosecutor's Office in the case of fictitious employment of parliamentary assistants… According to her entourage, the judges tightened the charges against the president of the National Rally, which had been reclassified due to misappropriation of state funds," the media outlet said.

EU is Not Europe: Marine Le Pen Urges for Creation of Alternative Political Bloc
In June, the European Court of Justice confirmed that the decision obliging that the leader of the French right-wing party return about 300 thousand euros to the European Parliament due to the "fictitious employment of party members."

Le Pen was accused of a "breach of trust" during the years 2009-2016 when she was a member of the European Parliament. The European Anti-Fraud Office (OLAF) claimed that the head of her party's cabinet, Catherine Griset, and her bodyguard, Thierry Léger, were fictitiously hired as assistants to the European Parliament, earning hundreds of thousands of euros.

Le Pen's lawyer stated that he intended to challenge the claim in court.