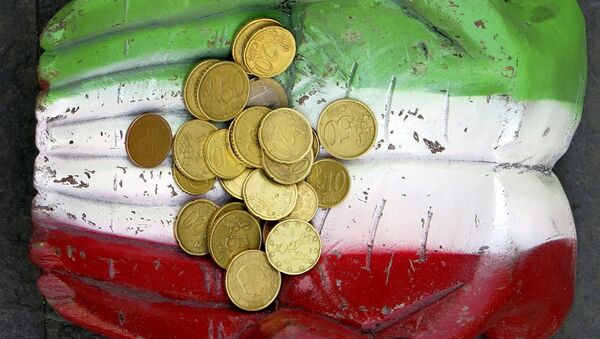 According to the head of the International Monetary Fund’s European department, many Eurozone countries are not doing enough to prepare for the next economic downturn and reduce their debt. On Thursday, IMF chief Christine Lagarde called for Italy to abide by European Union norms on fiscal discipline.

Sputnik has talked about Italy’s economy with Roland Benedikter, research professor of multidisciplinary political analysis at the Willy Brandt Center of the University of Wroclaw-Breslau and co-director of the Center of Advanced Studies of Eurac Research in Bozen-Bolzano.

Sputnik: How serious is the economic situation in Italy currently?

Roland Benedikter: Italy is basically stagnating. In summer 2018, Italy had growth of about 0.2% and in the first quarter of about 0.3%, so it’s well below the European average of 2.3%.

Nevertheless, the situation, strictly economically speaking, is not dramatic, it’s simply that there is stagnation and there’re some pending sectors that are influencing the international perception of the Italian situation.

Political Crisis in Italy Threatens to Capsize Eurozone Economy - Investors
Sputnik: Can you give us a little bit of insight into what is behind Italy’s economic woes?

Roland Benedikter: Italy has a structural problem which [has] persisted since the foundation of the nation in the 1860s, which is that there is a sharp divide between innovation of the economic sector and the efficiency of the state authorities and public administration.

In essence, you can say that Italy has a highly competitive and innovative industry and economy, while it is constantly hampered by the inefficiency of taxation, regulations as well as the insecurity of the rule of law and the interpretation of certain rules.

There is a constant struggle between different factors that is hindering the Italian economy to fully expand; this is a traditional factor. A more recent factor is the high indebtedness of 132% of GDP, which is certainly unsustainable.

Nevertheless, the good news is that this is going to decrease slightly; we saw a slight decrease of the public indebtedness over the last summer. It has increased again over the past weeks, but if we take seriously all the forecasts of the EU and independent international bodies, the Italian debt should decrease over the coming years, if the rules are kept.

Beyond Sanctions: Italy's Economy Starves Without Russian Business
Sputnik: What do you make of the findings of the IMF’s European subdivision regarding Italy?

Roland Benedikter: The IMF is in most cases right and the judgement that most countries are doing too little to decrease their national debt is certainly accurate.

The EU, on average, is indebted by 83% of GDP, with some countries well above the 100% threshold. Particularly countries like France and Italy have done too little to seriously reduce their indebtedness, because there is no political stability, especially in Italy. If you change the government every one or two years, there is no continuity of the program.

When you want to really reduce the national debt, which is a huge challenge, you have to be constant over decades and push through a reduction program; constantly stay with it, not change it and be really serious about pushing it through.

The best example over the past years was Sweden. Sweden had a public debt of about 80% in 1990s and has reduced it to 40%, so it is possible if you have the means, but you need political stability and continuity. That is what most of the Southern European nations still miss.

Rocky Forecast for Italy After Ratings Firm Downgrades Economy
Sputnik: I can imagine that there is also a lot of pressure on the government. Usually to reduce debt you have to take certain austerity measures, don’t you?

Roland Benedikter: You have. But this is a much disputed basic and fundamental question in economic theory since the 19th century. If the economy is good and you have good tax revenues, should you as a nation put in these austerity measures of repaying your debt and risk killing the momentum of the economy?

What we saw over the past years, this is what all the economic forecasts of the EU basically, for all countries, foresee is that there will be a reduction of public debt over the coming years.

Most forecasts say that until 2021, most European countries will slightly and constantly decrease their public debt. Of course, this is just a forecast and it, as I said, depends on stability, continuity and also on the global economic situation, on a dimension where there will be no dramatic events and no dramatic downfalls of any country, for example China or the US, which, of course, would then threaten the overall progress.

Views and opinions expressed in this article are those of Roland Benedikter and do not necessarily reflect those of Sputnik.