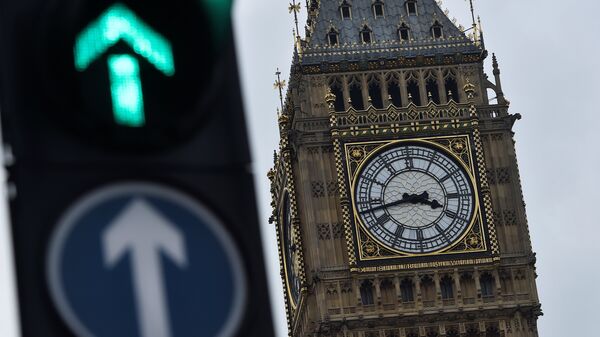 MOSCOW (Sputnik) – The Telegraph reported late on Wednesday that Brussels and London had reached an agreement regarding the so-called backstop to make sure that no border will separate Northern Ireland and Ireland after the UK's withdrawal from the European Union since a temporary customs union would be in place.

UK Prime Minister Theresa May will summon 11 cabinet ministers to her office later on Thursday to agree a Brexit plan ensuring that the United Kingdom will remain a part of the EU Customs Union (EUCU) until the parties reach an accord on a permanent free trade deal, local media reported.

The cabinet sources suspect that May has called the meeting to make key government figures commit to the plan in order to subsequently present it as a fait accompli to the rest of the cabinet the next week, when the prime minister is scheduled to have a meeting with the leaders of EU27 to discuss the Brexit process, according to the outlet.

On Wednesday, The Times reported, citing sources, that May planned to hold an extended discussion on further compromise measures on Brexit at a cabinet meeting next Tuesday, just ahead of her talks with other EU heads of state in Brussels. During the cabinet meeting, the UK prime minister was expected to discuss an obligation to keep the country in an effective customs union with the European Union following Brexit, but having "a clear process" of moves to end it later, the outlet suggested.

EU chief Brexit negotiator Michel Barnier said on Wednesday that a deal on the UK's withdrawal from the European Union could be reached in the course of one week. Barnier noted, however, that London should agree to a customs union with Brussels to avoid further protractions in concluding the deal.

UK Gov't Ally Threatens to Vote Down May's Brexit Plan if 'Red Lines' Breached
Former UK Foreign Secretary Boris Johnson, who resigned in July over disagreements with May on Brexit and who has been attacking May’s way of dealing with the withdrawal process ever since, said on Wednesday that such a backstop solution would turn the United Kingdom into a colony of the European Union, according to The Telegraph.

Moreover, on Wednesday, Sammy Wilson, the Brexit spokesman for the Northern Irish Democratic Unionist Party (DUP), which forms the coalition government with May’s Conservative Party, wrote in an article for The Telegraph that his party would not uphold a deal that included the proposed backstop.

The Brexit talks between London and Brussels have been ongoing since June 2017 with the issue of the Irish border being the major obstacle in the negotiations.